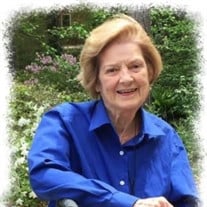 Jessie Allene Bankhead was born to Alvro E. Griffin and Claudie Weber Griffin on November 4, 1927 in Nixon , Gonzales County, Texas. She was the grandchild of Henry Korse Weber and Jessie Wheat Weber, and Jeff J. Griffin and Fannie Johnson Griffin also of Nixon. A fourth generation Texan, her ancestors began settling in the Green DeWitt Colony before Texas became a Republic and further immigrated from Germany before Texas became a State. Instilled at an early age, Allene had a deep love of the family land and history. Allene’s eligibility for The Daughters of the Republic of Texas, The Immortal Thirty-two Alamo Defenders Descendants Association, and the State of Texas Family Land Heritage Program for the Weber-Griffin Ranch’s over 100 continuous years of service to Texas Agriculture are all distinctions of which she was particularly proud. An only child as were her five first cousins, Roy, Bobby, Hal, Donald, and Gail, who also lived in Nixon, Allene was reared in a loving family which included many gatherings in town or out on the ranch known as “The Place”. A family of cattle ranchers and cowboys, she was taught by her father and uncles, Seidel, Ben and Paul, to ride horses sidesaddle while wearing a skirt. Her childhood entertainment included shopping trips with her mother and aunts, Bertie and Florence, to San Antonio, going to the movie theater in Nixon where she also at times worked in the ticket booth, or Saturday evening horse rides with friends four miles out of town to “The Y” where the road splits to go to either Gonzales or Luling. Allene was once crowned Queen of the Luling Watermelon Festival (a prestigious honor if you have ever had the pleasure of enjoying a watermelon from Luling)! At the age of 14, Allene’s first taste for travel occurred in the summer of 1941, when she joined two 16 year old girlfriends who without chaperones traveled by airplane for their senior trip to New York City. Thereafter, her teen years were shaped by World War II. Allene saw many a beau off to the military and the war overseas, some of which sadly did not return. The end of the war coincided with Allene’s graduation from Nixon High School with a graduating class of twelve. Thereafter, Allene enrolled at Southwestern University in Georgetown, Texas and the University of Texas at Austin and was a member of Delta Delta Delta sorority. It was after the war when she met Tom Bankhead who had returned to the University of Texas to attend Law School after two years of service in the United States Army. As Tom finished earning his law degree, Allene attained her Bachelor of Science in Elementary Education from Southwest Texas State College in San Marcos, and taught one term at Will Rogers Elementary School in San Antonio. Tom and Allene were married on June 18, 1949, and after a short honeymoon to Port Aransas, Texas, moved to Carthage where she was hired by Dr. Q.M. Martin as an elementary school teacher for the Carthage Independent School District. After two years, Allene stayed home to raise four children, Kevin, Phillip, Stacy, and Corey, and engage in community volunteer work in the Junior Service League and being Den Leader for the Cub Scouts. In 1978, Allene returned to teaching third grade with Carthage I.S.D. until her retirement in 1996. After retirement, Allene was able to devote her full attention to being “Grandmommy” to her six grandchildren, Kendall, Kelsey, Kristen, Griffin, Gracie, and Weber. She especially enjoyed the Thanksgiving and Christmas holidays where she indulged her grandchildren to excess. She and Tom began to travel abroad, sharing an interest in the foreign culture, architecture, gardens, and landscapes of England, Italy, Vatican City, France, Spain, Greece, Austria, Hungary, Slovakia, Poland, Germany, The Czech Republic and Switzerland, as well as Mexico, The Bahamas, The Cayman Islands, and The Virgin Islands. She was able to devote much time to her passion of gardening which her beautiful yards of azaleas and camellias and spring flowers over the years can attest. Allene also loved to read, and she was a member of the Carthage Book Club since 1994. Raised in the Methodist Church since birth, Allene was a member of The First United Methodist of Carthage, Texas, since 1949, having taught Sunday School in the Children’s Building for many years. Allene passed away at the age of ninety-three on March 28, 2021, comfortably at home with family. She is preceded in death by her husband, Thomas Aynes Bankhead who died on December 27, 2003. She is survived by her four children, Kevin Webster Bankhead and wife Diana, Phillip Clay Bankhead and wife Margie, of Dallas, Stacy Renee Bankhead Odom, and Corey Franklin Bankhead, of Carthage, as well as six grandchildren, Kendall Elizabeth Bankhead of Austin, Kelsey Camille Odom of New York City, Kristen Leigh Bankhead of Dallas, Griffin Thomas Bankhead, Gracie Mae Bankhead, and Weber Williams Bankhead of Carthage. Funeral services will be held Thursday, April 8, 2021, at 2 o’clock p.m. at the Hawthorn Funeral Home Chapel with Reverend Kevin Otto of First United Methodist Church, Carthage officiating with visitation on Wednesday, April 7, from 5-7 p.m. Serving as pallbearers are Griffin Bankhead, Weber Bankhead, Walter Vivaldi, Jack R Parker Jr., John Rittenberry, Judge David Anderson, Judge Terry Bailey, and Tommy Holmes and Honorary Pallbearers, the members of the Carthage Book Club. The family expresses special appreciation to personal assistant, confidante and friend, Claire Shaw of Timpson, as well as loving caregivers, Tomekia Jernigan, Jennifer Taylor, Alma Williams, Kim Thomas, Linda Ross, Faye Boyd, Wendy Jernigan, and Gabby Williams, and the office of Dr. Adam Duran, East Texas Medical Center, Texas Home Health, and Heartsway Hospice. In lieu of flowers, the family suggests memorials may be made to The First United Methodist Church of Carthage, Texas, or The Carthage ISD Education Foundation.

The family of Mrs Allene Bankhead created this Life Tributes page to make it easy to share your memories.

Send flowers to the Bankhead family.