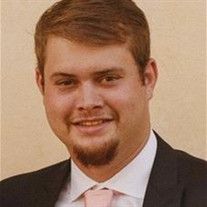 Andrew Evan Brightwell, 23, of Sealy, passed away on Sunday, December 8, 2019. Andrew’s immense love for his family and friends will be felt forever. He was the caring and warm son of Shawn and Dwight Brightwell of Sealy, younger brother and brother in law to Avery Stephens and Trent Stephens of Houston, and adoring uncle to Trent and Avery’s daughters. He also leaves behind many cherished uncles, aunts, cousins, and tremendous friends. Andrew was a student at Texas A&M University in College Station and was pursuing a degree in geographic information systems technology there. He was also a high school graduate of Sealy High School. Andrew’s interest in his major field was initiated by his father’s own work that Andrew admired. Andrew was a determined and hard worker like his father. Andrew loved taking regular hunting and fishing trips with his dad and the two of them had the best times together in the quiet of those moments. He also loved attending cooking classes with his mother and was always trying out new recipes on his own and making his own unique creations. Andrew loved his dog Jax and the two were together always. Andrew will be remembered for his bright smile, the way he laughed so hard he would cry, and his warm gentle nature. Andrew also suffered from alcohol addiction, a disease he struggled with in the last years of his life. While he was unable to overcome that battle, he was a fierce and persistent fighter. He sought God’s help during his struggle and was optimistic about a new start in life. He did finally start a new life, and though it’s not the one he, or anyone was planning, it is for better and eternal. Andrew knew Jesus Christ as his savior and in the end it was He who finally decided Andrew had struggled enough and brought him home. Andrew would want everyone who shares this same struggle to know there is help, there is hope, and there are so many loving people who can and will support you. Andrew’s message to all would be: NEVER QUIT FIGHTING. A visitation is planned at Hawthorn Funeral Home in Carthage, Texas from 6:00 p.m. to 8:00 p.m. on Friday, December 13, 2019 followed by a graveside service at Waldrop Cemetery in Fairplay, Texas at 2:00 p.m. on Saturday, December 14, 2019. In lieu of flowers, Andrew’s family would appreciate any donations that can be made in memory of him at the church he attended in College Station, Texas. To make donations please us this link: https://pushpay.com/g/brazosfellowship choose “In Memory of” and follow the prompts. 100% of the proceeds donated in memory of Andrew will be towards Brazos Fellowship’s Be Rich Campaign in which the church collaborates with local organizations this holiday season, a campaign Andrew was excited about being a part of. An online guestbook may be signed at www.hawthornfuneralhome.com

Andrew Evan Brightwell, 23, of Sealy, passed away on Sunday, December 8, 2019. Andrew&#8217;s immense love for his family and friends will be felt forever. He was the caring and warm son of Shawn and Dwight Brightwell of Sealy, younger brother... View Obituary & Service Information

The family of Mr. Andrew Evan Brightwell created this Life Tributes page to make it easy to share your memories.

Andrew Evan Brightwell, 23, of Sealy, passed away on Sunday,...

Send flowers to the Brightwell family.