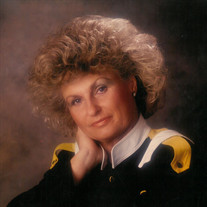 Funeral services for Mrs. Ann Chambers, 72, of Beckville, Texas will be 2:00 pm, Thursday, December 6, 2018 at the Hawthorn Funeral Home Chapel with Mr. Jack Runnels officiating. Burial will follow in the Langley Cemetery under the direction... View Obituary & Service Information

The family of Mrs. Ann Chambers created this Life Tributes page to make it easy to share your memories.

Send flowers to the Chambers family.