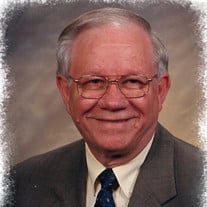 Bishop Benjamin Roy (Ben) Chamness of Huntsville, Texas went to be with his Lord on December 22, 2018, after a long struggle resulting from a fall on March 3, 2018. He was born June 16, 1940 to the late Bernice and Alice Chamness of Carthage, Texas. He is survived by his wife Joye of 58 years, two sons David and wife Caroline of Kingwood; Stephen of Austin; grandchildren Patrick Gilroy, Courtney Chamness, Matthew Chamness and Stephen Chamness of Kingwood; Cristopher Chamness and Yvonne Chamness of Austin; brothers James and wife Joyce of Lufkin, Dennis Chamness of Carthage, and Clyde Chamness of Carthage; several nieces and nephews, as well as several great nieces and nephews. Bishop Chamness served a number of churches of varying size while a member of the Texas Conference of the United Methodist Church where he was ordained an elder in 1965. As a student he served the Mt. Hope Circuit in Henderson, Texas; Panola County Rural Work; and Diana Circuit in Diana, Texas. Following graduation from seminary, he served as pastor of Avinger, Maud and Jacinto City United Methodist Churches. In 1969 he moved to Missouri City where he served for nine years as pastor of First United Methodist Church which grew from 2000 to 900 members. He served as Senior Pastor of United Methodist Temple from 1978-1982. As Senior Pastor of Kingwood United Methodist Church from 1982-1992 he received 2700 new members, developed a Pastoral Care Committee that trained and involved laity in a caring ministry, led a building program that included 12,000 square feet of educational space, acquired a new debt-free parsonage, and involved 200 youth and adults in UMArmy-a mission throughout East Texas. From 1992-1996 he was Senior Pastor of Marvin United Methodist Church in Tyler, In 1996 he was asked by Bishop J. Woodrow Hearn to serve as District Superintendent of the Houston Northwest District and from that position his peers and laity in the South Central Jurisdiction elected him to the Office of Bishop. He was assigned to serve the Central Texas Conference of the Ft. Worth Area for eight years. In 2011` he was called out of retirement to serve for one year as an interim bishop of the Nashville Area which included the Memphis and Tennessee Conferences. Bishop Chamness received his BA Degree from Centenary College in 1962, his Master of Theology from Perkins School Theology, SMU in 1965 and; his Doctor of Ministry from Drew University in 1986. Bishop Chamness served on many boards and agencies of the United Methodist Church. He was honored to be named the Distinguished Alumni of Lon Morris College in 1996; in 2008 the United Methodist Men Foundation recognized him as a Fellow of the Society of John Wesley; and in 2011 he received the Clay Lee Award from the General Board of Pensions and Health Benefits. Upon retirement in 2008 he moved to Elkins Lake where he enjoyed reading for pleasure, playing bridge, working on his genealogy, attending Houston Astros games, hunting and enjoying his grandchildren. Graveside service will be Saturday, December 29, 2018 at 2:00pm at Rehobeth Cemetery, Carthage, Texas. The body will lie in state at Rehobeth United Methodist Church from 1-2:00pm. A memorial service will be held at First United Methodist Church of Huntsville Texas on Friday, January 4, 2019 at 11:00am. The family will receive friends from 10 - 11:00 a.m. prior to the service. Services under the direction of Sam Houston Memorial Funeral Home and Hawthorn Funeral Home. In lieu of flowers, memorial may be made to First United Methodist Church, Rehobeth United Methodist Church, or the Central Conference Pension Initiative of the General Board of Pensions and Health Benefits.

Bishop Benjamin Roy (Ben) Chamness of Huntsville, Texas went to be with his Lord on December 22, 2018, after a long struggle resulting from a fall on March 3, 2018. He was born June 16, 1940 to the late Bernice and Alice Chamness of Carthage,... View Obituary & Service Information

The family of Bishop Benjamin Roy "Ben" Chamness created this Life Tributes page to make it easy to share your memories.

Send flowers to the Chamness family.