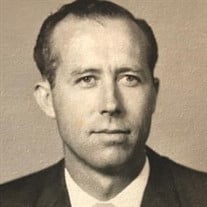 Mr. Billy R. Cranford of Carthage, Texas, age 90, passed peacefully at home in Aztec, NM on September 17, 2019. Visitation for Mr. Billy R. Cranford will be 6-8:00 p.m. at the Hawthorn Funeral Home on Saturday, September 21, 2019. Graveside services will be 2:00 p.m. Sunday, September 22, 2019 at Walton Cemetery, with Dr. Dale Reed officiating. Billy Ray Cranford was born January 28, 1929 in Panola County, Texas. He was the 7th of 9 children born to the marriage of William Lee and Catherine Elma Holt Cranford. Billy Ray married the love of his life, Faye June Chapman Cranford January 10, 1951 in Cusseta, Chattahoochee County, Georgia. They celebrated 62 years of marriage before Faye preceded him in death in July 2013. Mr. Cranford had worked as a farmer, cab driver, heavy equipment operator, and eventually retired as a pipeline area field superintendent from El Paso Natural Gas after 35 years. The EPNG job required he and his family to relocate various times throughout his career living in New Mexico and Texas. He and Faye returned to Carthage to enjoy their retirement years. During those early retirement years Billy Ray enjoyed hunting, fishing, gardening, spending time with family and being outdoors. Bill was an avid sports fan of the Astros and Cowboys. Bill was preceded in death by his parents, his eldest son, Stephen Ray Cranford and his wife, Faye June Chapman. Additionally, all of Mr. Cranford’s brothers and sisters, Lawrence Cranford, Bernard Cranford, Lucille Hight, Robert Steve Cranford, L. D. Cranford, J. D. Cranford, Lee Vernon Cranford and Virginia Shires. Bill is survived by his other two children, Michael Shane Cranford of Houston, Texas; Sherryl Cranford-Coffey and husband Ryan Coffey of Aztec, New Mexico. Bill’s granddaughter, Stacy and Jason Sandel of Farmington, NM and great grandchildren, Stella and Jasper Sandel. His grandson, Chason and Kim McMullen of Tuscaloosa Alabama and great grandchildren, Sarah Chase and Mason McMullen. Additionally, Bill’s sister-in-law, Dr. Sherryl Pavlick of Pittsburg, PA. As a result of extended family, Mr. Cranford was blessed and took delight in his additional 5 great grandchildren. Kamiyrn, Kaleb and Hunter Coffey of Carlsbad, NM; Sophia and Gabriel Badillo of San Antonio, Texas as well as numerous nephews and nieces. Billy Ray was baptized by Dr. Dale Reed’s father Pastor Ottie Reed as a young boy of 12. Bill said knowing Jesus as his personal savior, he was not afraid of death. By his grace and mercy, I am His and He is mine and nothing will change it. I look forward to being with Him for an eternity. My body is worn and I am ready. His favorite scripture was John 3:16. Throughout Mr. Cranford’s life he has been an advocate and supporter of children’s rights to life. In lieu of flowers, please donate to your local church, local hospice or other organizations that support children’s programs. The family would like to take this opportunity to thank the wonderful people of Basin Hospice in Farmington, NM Pall bearers in attendance: Stacy Cranford, Blake Cranford, Brady Cranford, Carlos Lotero, Brent Hight, and Andy Ward

The family of Mr. Billy Ray Cranford created this Life Tributes page to make it easy to share your memories.

Send flowers to the Cranford family.