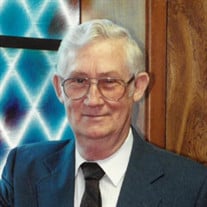 On December 9, 2020, Bro. Billy Mack Shoffner won the race God set before him at his birth in a sharecropper cabin on December 29, 1929 in Rosalie, TX. Dad crossed the finish line of his endurance Run for Jesus with a finishing time of 90... View Obituary & Service Information

The family of Rev. Billy Mack Shoffner created this Life Tributes page to make it easy to share your memories.

Send flowers to the Shoffner family.