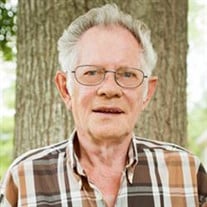 Bobby Joe Deaton, 76, of Tatum, TX passed away at Treviso Transitional Care in Longview, TX on June 9, 2018 after a brave and protracted battle with Parkinson’s Disease. Bobby Joe was born to Joseph Stone Deaton and Edith Mae Cunningham Deaton on March 22, 1941 in Tatum, TX and resided there until the last two years of his life. His wife Elaine, the love of his life, joined him at Treviso Transitional Care in 2017, and it was there that he spent his remaining year in her company. Bobby Joe worked for Drew Woods in Carthage, TX for 30 years. He was a true outdoorsman and loved to spend his free time in nature - hunting and fishing with his brother Jimmy and brothers-in-law Bobby Jack Ellison and Roy Lee Ellison. He was a member of a hunting club for many years and always enjoyed the time spent with other members. He was a peaceful man who loved working in his garden, working around his yard, and creating in his backyard shop. Before moving to Treviso, he desperately wanted to plant just one more garden. However, his body would no longer allow him the pleasure. He was a member of the First Baptist Church in Tatum, TX. Over the past months before his death, Bobby was under the care of Heart to Heart Hospice and thoroughly enjoyed his visits with Chaplain Lawrence Thompson. Chaplain Thompson spent many hours in prayer and talking of the Lord with both Bobby and Elaine, and he provided a peaceful and compassionate environment for both during his transition from this life to the next. Bobby is preceded in death by his parents, Joseph “Joe” Stone in 1967 and Edith Mae Cunningham Deaton in 2001. Bobby Joe is survived by his loving wife Dorothy Elaine Ellison Deaton of 58 years and his three dear children and their spouses: Dondie Jo Deaton Barron and husband David Justin, Chuck Dwayne Deaton, and Kathy Kristene Deaton Dennis and husband Stephen Vaughn. Bobby Joe was the grandfather of four: Wendi Dennis Hodges and husband James Edward IV “Beau”, Jonas Broc Deaton, Dustin Chase Barron, and Vallen Makenzie Dennis. Bobby Joe was the great-grandfather of three: James Edward V “Colt” Hodges, Lilah Grace Hodges, and Duke Ethan Hodges. Bobby is also survived by three loving siblings: Carol Ann Deaton Monic and husband Gary, Joyce Sue “Sissy” Deaton Harris and husband Jerry, and Clifford James “Jimmy” Deaton and wife Janie. Bobby Joe is also survived by countless nieces and nephews. Visitation will be held at Hawthorn Funeral Home in Carthage, TX the morning of June 16 from 10:00 to 11:00. Interment will immediately follow visitation at 11:30, and Mr. Deaton will be laid to rest at the Tatum Cemetery in Tatum, TX. The family is deeply grateful for the outpouring of love, prayers, and support in the many heartfelt forms. There are too many people to thank individually, however, we say thank you from the bottom of our hearts to Hospice, caregivers from Treviso, Bobby’s loving sisters and brother, his loving sister-in-law Denise Ellison, and random acts of kindness through total strangers. Pallbearers include: Chuck Deaton, Jonas Deaton, Chase Barron, Justin Barron, Vaughn Dennis, and Beau Hodges. In lieu of flowers, memorial donations may be made to Heart to Heart Hospice, 100 W. Hawkins Parkway, Suite A, Longview, Texas 75605.

The family of Mr. Bobby Joe Deaton created this Life Tributes page to make it easy to share your memories.

Send flowers to the Deaton family.