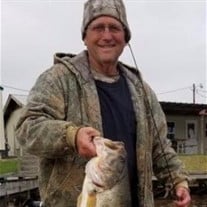 Memorial services for Mr. Charles Wyatt, 57, of Gary, Texas will be 2:00 p.m. Saturday, February 1, 2020 at the Hawthorn Funeral Home Chapel with Bro. Levi Cohorst and Bro. Cody Bird officiating. Visitation will be 1-2:00 p.m. Saturday prior to the service. Cremation services have been entrusted to Hawthorn Funeral Home. Mr. Charles Price Wyatt was born September 10, 1962 in Houston, Texas. He passed this life January 27, 2020 in Carthage, Texas. Mr. Wyatt was one of three children born to the marriage of Bobby Ray and Lynnell West Wyatt. He was of the Baptist faith and was blessed to have married the love of his life, Sonya Benson Wyatt on June 25, 1985 in Corpus Christi, TX. Mr. Wyatt loved the outdoors, fishing, hunting, and trapping. He also loved anything hotrod, the NHRA and his ’66 Chevy pickup. Mr. Wyatt worked for many years as an oil field foreman/supervisor. He is preceded in death by his parents and grandparents. Mr. Wyatt is survived by his loving wife Sonya Wyatt of Gary; two sons, Cameron Wyatt of Dallas and Taylor Wyatt of Gary; one daughter, Bailey Wyatt of Nacogdoches; one brother, Norman Wyatt and wife Myrna of Arlington, WA; one sister, Bobbie Davis of Carthage; four nieces, Callie Davis, Jessica Wyatt, Chelsea Wyatt and Cassandra Wyatt; and one nephew, Trevin Davis. A host of friends also survive Mr. Wyatt. An online guestbook may be signed at www.hawthornfuneralhome.com

The family of Mr. Charles Wyatt created this Life Tributes page to make it easy to share your memories.

Memorial services for Mr. Charles Wyatt, 57, of Gary, Texas will...

Send flowers to the Wyatt family.