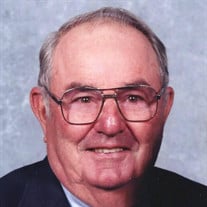 Funeral service for Mr. Clyde Graves, 92, of Gary, Texas, will be held on Thursday, April 14, 2022, at 2:00 p.m. at the Hawthorn Funeral Home chapel with Rev. Dale Walker and Rev. Dock Lazarine officiating. Burial will follow in the Gary Cemetery under the direction of Hawthorn Funeral Home. Visitation will be held at 1:00 p.m. on Thursday prior to the service. Mr. Clyde Ennis Graves was born on April 20, 1929, in Gary, Texas to parents, Gladys and Clyde Graves. He passed this life on April 11, 2022, in Beaumont, Texas. Mr. Graves grew up and was schooled in Gary, Texas. After graduation, he attended Stephen F. Austin in Nacogdoches where he met the love of his life, Nellie Faye Muckelroy. They married on September 8, 1951, and together they celebrated 62 years of marriage. He went to work for Gulf Oil Company in Port Arthur, Texas in 1951 where he worked until 1987. They lived in Port Neches, Texas while working for Gulf Oil Company and raising his family. He was also widely known for his AC/Heating service work both for Comfort Zone AC Company in Groves, Texas and later went to work for himself. He was devoted to God and his church where he served as a deacon. He loved the outdoors, teaching his children, grandchildren, and great grandchildren to fish and hunt. He loved his family and grandchildren, and he gave his unconditional support to everything they were involved in. He could always be found at any of his grandchildren / great grandchildren’s sporting events. He is preceded in death by his parents, his loving wife of 62 years, Nellie Faye Graves, grandsons, Clyde Reagan Graves, Zachary Gerald Graves, and one great grandson, Darren Joshua Gaspard. He is survived by his son, Clyde G. (Skeeter) Graves and his wife Kathy Sue of Port Neches, and daughter, Nell Laduskye Withers, and her husband Steve of Nederland; grandchildren and their spouses, Cameron Withers, Chelsea Burkart and Rachel Lyons, Cassie Wilson, and Jessica Graves; great grandchildren, Raegan Graves, Xephyn Sneed, William and Zoey Gaspard, Haley and Aubrey Withers, Alexander and Elizabeth Burkart, Macie, Chloe, Cooper, Welsey and Whitney Wilson. Serving as pallbearers will be Dan Willson, Cameron Withers, Aaron Lyons, Raegan Graves, Daron Lee, Robert Williams. The family would like to give a special thank you to Cindy and Camarie of Elara Carin Hospice and Vickie of Serenity Assisted Living. Memorial contributions in honor of Mr. Clyde Graves may be sent to Eastside Baptist Church, 1996 FM 999 Gary, Texas 75643

Funeral service for Mr. Clyde Graves, 92, of Gary, Texas, will be held on Thursday, April 14, 2022, at 2:00 p.m. at the Hawthorn Funeral Home chapel with Rev. Dale Walker and Rev. Dock Lazarine officiating. Burial will follow in the Gary Cemetery... View Obituary & Service Information

The family of Mr Clyde Ennis Graves created this Life Tributes page to make it easy to share your memories.

Send flowers to the Graves family.