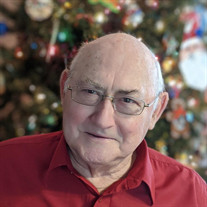 Graveside services for Reverend Danny Wayne Powell, age 71, of Carthage, Texas will be 2:00 p.m. Friday, January 1, 2021 at the Adams Cemetery with Rev. Todd Andrews and Rev. Richard Cook officiating. Burial will follow under the direction of Hawthorn Funeral Home. Rev. Danny Wayne Powell passed away on Sunday, December 27, 2020 in Tyler, Texas. Danny was born on January 22, 1949 to the late Homer D. and Dorothy Jean Johnson Powell in Logansport, LA. He graduated from Tipton High School in Tipton, OK in 1966. After graduation he attended Altus Junior College in Altus, OK as well as The Oklahoma School of Banking and Business in Oklahoma City, OK. Danny married his high school sweetheart, Dora Rae Stewart on Friday, February 13, 1970 and they were blessed with three children and one grandchild. He worked in the aircraft industry for 35 years. Danny was a faithful and dedicated servant of God for many years. Serving as a minister, Sunday School teacher, and in many other areas in the church. He received his ministerial license with the United Pentecostal Church International in Mustang, OK in the 1970s. Danny faithfully attended Deadwood United Pentecostal Church in Deadwood, TX with his family. He loved his pastor and church family very much. He is preceded in death by his parents, Reverend Homer D. Powell and Dorothy Jean Johnson Powell and uncle Dillard "Buddy" Johnson. Left to cherish and honor his memory are his wife Dora Powell, son Michael Scott Powell and his wife Tamara L. Powell, daughters Michele Suzanne Powell and Rebecca Rae Powell, and one cherished grandson, Austin Powell, all of Carthage, TX. Brother, Dale Powell and wife Sondra of Magnolia, AR. Sister Teuna Dianne Cook and husband Richard of Jefferson, TX. Aunt Mary Lou Johnson of Carthage, TX. As well as a host of other family and friends. Pallbearers will be: Vaughn Gurley, Matthew McMillon, Billy Hill Emmons, Chad Gipson, Mark Harrison and Shaun Oliver. An online guestbook may be signed at www.hawthornfuneralhome.com

The family of Rev. Danny Wayne Powell created this Life Tributes page to make it easy to share your memories.

Send flowers to the Powell family.