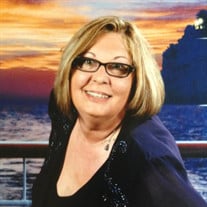 Funeral services for Mrs. Deborah Jeffress Jackson, 66, of Tenaha, Texas will be 11:00 a.m. Monday, April 4, 2022 at the Hawthorn Funeral Home Chapel with Pastor Jody Hooper and Larry Jeffress officiating. Visitation will be 10-11:00 a.m. prior to the service. Cremation will follow under the direction of Hawthorn Funeral Home. Her ashes will be lain to rest on the Galveston beaches where she was born. Mrs. Deborah Ann Jeffress Jackson was born July 27, 1955 in Galveston, Texas. She passed this life March 31, 2022, in Center, Texas. Deborah was one of three children born to the marriage of Wilma Ann Wilson and William Morris Jeffress. She was raised and schooled in Tenaha, Texas. Deborah married James Harris Jackson in April of 1993 and he preceded her in death May 29, 2005. Mrs. Jackson worked for Center I.S.D. in the cafeteria and 16 years for H.E.B. in the Deli. She was a member of the First Baptist Church of Haslam. Deborah loved cooking and the art of sewing and quilting. She is also preceded in death by her brother, Gary Lynn Jeffress. Mrs. Jackson is survived by her children, son, David Fenton and wife Carri of Millsboro, VA, daughter, Arin Fenton of Tenaha; brother, Larry Jeffress and wife Judy of Woodlawn, WA; step mother, Angie Jeffress of Tenaha; grandson, Caleb Herring; nieces, and nephews, Kayla Jeffress of Alaska, Sarah Saxton and husband Gage of Alaska, Serena Jeffress of Gillette, WY, and Buddy Jeffress of Gillette WY; a host of aunts, uncles, cousins and friends.

The family of Deborah Ann Jackson created this Life Tributes page to make it easy to share your memories.

Send flowers to the Jackson family.