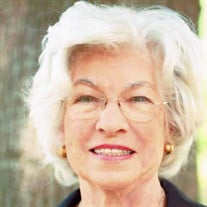 Dorothy Elaine Ellison Deaton, 76 years of age, was born on October 9, 1942, in Pasadena, Texas, Harris County, to Joseph Roy and Dorothy Goldie Russell Ellison and passed away peacefully with her loving family by her side on August 17, 2019. With her beloved brothers and sister, Elaine lived in Coke, Texas as a young child and moved to various other cities with her family. In her early teenage years, Elaine moved to Tatum, Texas, and it is there where she went to school and lived her life until her health failed her in 2017. Elaine married the love of her life, Bobby Joe Deaton in Quitman, Texas, Wood County, on October 10, 1960. She and Bobby had three children, and Elaine was a homemaker until her children were in high school. Elaine spent endless hours taking care of their every need. She was a seamstress, an excellent cook, and very artistic and crafty. She had the will and determination to get things done with whatever tools she had to work with, and sometimes that was not a lot. Her home was filled with laughter from her kids, neighbor kids, and friends and family. Her home was also the go-to-place for the kids to eat after school. She raised her children to think about the choices you make and to do what was right in the eyes of our Heavenly Father. In her later years, she became a member of the First Baptist Church in Tatum, Texas. Elaine started an in-home daycare when her children were in high school. She later worked as the director and teacher of both Small World Day Care Center and Education Station in Tatum. Elaine then opened and operated Bearly Pre-School. It is there where she continued her life's work of educating children. Known as "Ms. Elaine," she poured her heart and soul into every child that she encountered daily. She would spend countless hours preparing for the kids' day-to-day lesson plans, festive activities, learning activities, and Christmas celebrations. Friends and family can never forget the attention to detail spent in preparing the Christmas floats for the children. At the end of each school year, she would work many hours with the children to make sure every element was in place, and all the words were memorized for the children's graduation program. Elaine would ensure all graduating would be able to accept their diploma wearing full cap and gown. She gave it her all. Elaine fell ill in 2010 and was forced into retirement. It was so hard for her to put the daycare behind her. She wanted her health to improve so that she could return to what she loved. But it was not meant to be. During those later years, she spent countless hours enjoying her family and friends and was always looking to try a new recipe. Elaine is survived by her three dear children: Dondie Jo Deaton Barron and husband David Justin from Carthage, Texas, Chuck Dwayne Deaton and Robert Joseph Sarlay from Huntsville, Texas, and Kathy Kristene Deaton Dennis and husband Stephen Vaughn of Longview, Texas. Elaine was the grandmother of four: Wendi Lea Dennis Hodges and husband James Edward IV "Beau" from Elysian Fields, Texas, Jonas Broc Deaton from Denver Colorado, Dustin Chase Barron from Dallas, Texas, and Vallen Makenzie Dennis from Longview, Texas. Elaine was a great-grandmother of three: James Edward V "Colt" Hodges, Lilah Grace Hodges, and Ethan Duke Hodges. Also survived are two loving siblings: Roy Lee Ellison and wife Barbara from Beckville, Texas and Wanda Jean "Jeannie" Ellison Beal and spouse Brent from Mansfield, Texas. Elaine’s loving sisters-in-law include: Linda Ellison from Houston, Texas, Elizabeth Ellison from White Oak, Texas, Denise Ellison from Beckville, Texas, and Carolyn Synoground from Leverett’s Chapel, Texas. Elaine had a host of nieces and nephews. Elaine is preceded in death by her spouse of 58 years, Bobby Joe Deaton in 2018, parents, Joseph Roy Ellison in 1977 and spouse Zella Murray, Goldie Dorothy Russell McCarty in 1980 and spouse R.L. "Spud" McCarty, brothers: Bobby Jack in 2014, Richard Laverne in 2010, Tommy Doyle in 2016, Dewey Kenneth in 2016, and Jimmy Odell Ellison in 1986. She is also preceded in death by one nephew, Darren Keith Ellison in 1996. Visitations to celebrate the life of Elaine will be at Hawthorn Funeral Home in Carthage, Texas on Saturday, August 24 from 11:00 am to 1:00 pm. A procession will follow immediately after to the Tatum Cemetery in Tatum, Texas and a graveside service will be at 1:30 pm. In lieu of flowers, donations can be made to the American Cancer Society or Heart to Heart Hospice of Longview, Texas.

Dorothy Elaine Ellison Deaton, 76 years of age, was born on October 9, 1942, in Pasadena, Texas, Harris County, to Joseph Roy and Dorothy Goldie Russell Ellison and passed away peacefully with her loving family by her side on August 17, 2019.... View Obituary & Service Information

The family of Mrs. Dorothy Elaine Deaton created this Life Tributes page to make it easy to share your memories.

Send flowers to the Deaton family.