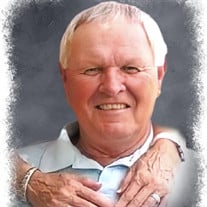 Funeral services for Mr. Doug Lawhorn, 77, of Longview, Texas will be 2:00p.m. Monday, February 14, 2022, at the Carthage Missionary Baptist Church with Rev. Roger Bynog, Bro. Ronnie Mutina and Bro. Mark Manning officiating. Burial will follow in the Odd Fellows Cemetery under the direction of Hawthorn Funeral Home. Visitation will be 1-2:00 p.m. Monday prior to the service. Mr. Waymon Douglas “Doug” Lawhorn was born August 20, 1944, in Carthage, Texas. He passed this life February 9, 2022, in Dallas, Texas. Doug was one of eight children born to the marriage of Shella Roy and Wilma Gay Bagley Lawhorn. He was raised and schooled in Carthage graduating with the Bulldog class of 1962. He married his love, Faith Deanne Oney October 16, 1963, and they celebrated 58 years of marriage and three children. Mr. Lawhorn spent his career in construction management for Brown and Root, retiring after 35 years of service. He was a member of the Greggton Missionary Baptist Church where he served as a deacon, music leader and Sunday school teacher. His first love was for the Lord and serving Him, and then the love of his life, Deanne, his children, grandchildren and family. His love for music was a huge part of his life, he sang with The Masters Quartet for many years. He Loved playing baseball, playing in high school and later playing for the semi pro team The Marshall Browns, and after that he coached his children and grandchildren in the sport until they were in High School. He enjoyed watching all of his grandchildren playing football with all five earning a state championship ring. He was one proud Papaw. He is preceded in death by his parents; siblings, Sybil Pierce, Wendell Lawhorn, and sister-in-law, Judy Lawhorn. Mr. Lawhorn is survived by his loving wife, Deanne Lawhorn of Longview; sons, Kirk Lawhorn and wife Penny of White Oak, Kris Lawhorn and wife Robin of Longview; daughter, Shelly Jesters of Longview; brothers, Tommy Lawhorn and wife Betty of Carthage, Charlie Lawhorn and wife Leisa of Carthage, Wayne Lawhorn of Carthage; sisters, Elsie Holland of Carthage, Barbara Tipton of Carthage; sister-in-law, Clementine Lawhorn of Carthage; grandchildren, Kristopher Lawhorn and wife Summer, Kole Lawhorn, Dane Jesters, Raygan Haranda and husband Larry, Ryen Lawhorn and wife McKayla; great grandchildren, Chloe, Whitlee, Raylee, Brayden, RaeLynn, Parker, Kyra, Addison, and Braxton (on the way). Serving as pallbearers will be, Kole Lawhorn, Kristopher Lawhorn, Ryen Lawhorn, Dane Jesters, Eric Oney, Billy Everett, Jeffery Rogers, Matt Tipton; honorary pallbearers will be, Brad Tipton, Gary Oney, Wayne Oney, Stephen Lawhorn, and Larry Haranda.

The family of Mr. Doug Lawhorn created this Life Tributes page to make it easy to share your memories.

Send flowers to the Lawhorn family.