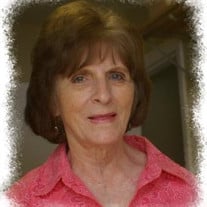 Funeral services for Mrs. Evelyn Wilkins, 81, of Carthage, Texas will be 10:00 a.m. Saturday, October 19, 2019 at the Hawthorn Funeral Home Chapel with Rev. Jared Brown and Rev. E.J. Adams officiating. Burial will follow in the Clayton Cemetery under the direction of Hawthorn Funeral Home. Visitation will be 6-8:00 p.m. Friday night at the funeral home. Mrs. Evelyn Ruth Fleetwood Wilkins was born February 11, 1938 in Manchester, Texas. She passed from this life October 15, 2019 in Carthage, Texas. Evelyn was born to the marriage of Speedie Richard and Marie Robinett Fleetwood. she was raised and schooled in DeBerry, Texas and later graduated with the Carthage High School Class of 1955. Evelyn attended Panola Junior College. She later married Frank Lloyd Wilkins October 8, 1966 and they celebrated almost 24 years of marriage before he preceded her in death in May of 1990. Mrs. Wilkins was a loving homemaker, she and her husband Frank owned and operated Frank’s Charburgers for many years on the Carthage Square. In her later years she would work the tourist season in Yellowstone Park where she loved the natural beauty she was blessed to work around. She loved the First Assembly of God in Timpson, where she attended for many years as well as New Hope Baptist. Evelyn was a loving Wife, Mother, and grandmother to the family she loved. She is also preceded in death by her parents; sister, Sylvia Doris Adams; and brother, Clanton Richard Fleetwood. Mrs. Wilkins is survived by her son, David Shaun Wilkins and Daleena Ewbank both of Kansas City, Missouri; daughter, Monica Mason and husband James of Carthage; sister, Necia Armstrong and husband Buddy of Carthage; sister-in-law, Louise Fleetwood of Tyler; grandchildren, Ryan Keith Mason and wife Laura of Carthage, Allyson “Ally” Danielle Mason and Jacob Rolen both of Savoy; great grandchildren, Aiden Carter Rolen, Annabelle Grace Mason, and Lane Price “Beau” Mason; numerous nieces, nephews, and a host of friends. Serving as pallbearers will be, Chase Henley, Larry Moore, David Henley, Jacob Rolen, Wayne Sells, and Ryan Mason. Honorary Pallbearer will be Anthony Fleetwood. An online guestbook may be signed at www.hawthornfuneralhome.com

The family of Mrs Evelyn Ruth Wilkins created this Life Tributes page to make it easy to share your memories.

Send flowers to the Wilkins family.