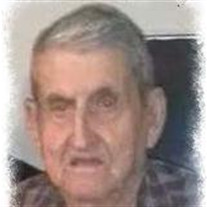 Funeral services for Mr. Fred Harrison, Jr., 86, of Galloway will be 4:00 p.m. Sunday, June 2. 2019 at the Hawthorn Funeral Chapel with Rev. Chester Farmer officiating. Burial will follow in the Adams Cemetery. Visitation will be 2-4:00 p.m. prior to the service at Hawthorn Funeral Home. Mr. Fred Warren Harrison, Jr. was born January 14, 1933 in Logan, Texas to the marriage of Fred Warren and Mary Susan Reeves Harrison, Sr. and he passed this life June 1, 2019 in the Antioch Community of Panola County, Texas. Fred was raised and schooled in Galloway, Carthage and Joaquin schools. Fred Jr. married Anna Frances Sirman June 7, 1952 in Joaquin and together they celebrated 57 years of marriage and raised four children in a loving home and many grandchildren before she preceded him in death in 2009, Mr. Harrison spent his life as a rancher and worked in the oil and gas industry before his retirement. He attended the New Prospect Baptist Church, loved spending time with his family and the outdoors hunting and fishing. He is also preceded in death by his parents, and a son, Joe “Road Hog” Harrison. Mr. Harrison is survived by his son, Johnny Wayne Harrison and wife Bobbie of Deadwood, daughters, Betty Joyce Britt and husband David of Antioch, and Dianna Pierce of Tatum; brother, Jerry Wayne Harrison and wife Carolyn of Galloway; grandchildren, Michael, Jason, Mitchell, Danny, Boo, Davy, Richard, Dustin, Justin, Katrina, and Miranda; numerous great and great great grandchildren, other relatives and a host of friends. Serving as pallbearers will be his grandsons and honorary pallbearers will be his great grandsons.

Funeral services for Mr. Fred Harrison, Jr., 86, of Galloway will be 4:00 p.m. Sunday, June 2. 2019 at the Hawthorn Funeral Chapel with Rev. Chester Farmer officiating. Burial will follow in the Adams Cemetery. Visitation will be 2-4:00 p.m.... View Obituary & Service Information

The family of Mr. Fred Harrison Jr. created this Life Tributes page to make it easy to share your memories.

Send flowers to the Harrison family.