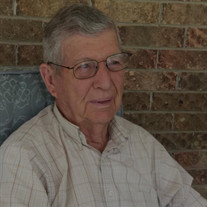 Funeral services for Mr. Horace Robison, 87, of Carthage, Texas will be 2:00 p.m. Saturday, July 7, 2018 at the Hawthorn Funeral Home Chapel with Rev. Randy Miller officiating. Burial will follow in the Restland Memorial Park Cemetery under the direction of Hawthorn Funeral Home. Visitation will be 6-8:00 p.m. Friday night at the funeral home. Mr. Robison died July 2, 2018 in Alexandria, Louisiana. Mr. Horace Glen Robison was born October 15, 1930 in Carlyle, Texas and passed July 2, 2018 in Alexandria, Louisiana. He was one of three children born to the marriage of Ernest Webb and Laura Virginia Price Robison. He was raised and schooled in Ringgold, Louisiana graduating with the class of 1948. He served his country through the U.S. Marine Corp. during the Korean conflict. Horace married Sue Clara Lawhorn and they celebrated 48 years of marriage before she preceded him in death in 1999. Horace worked as a Compressor Station Operator for United Gas for 41 years. He was a member of the Macedonia Baptist Church and the Carthage Masonic Lodge #521 AF&AM. He is also preceded in death by his sons Ronnie Robison and Ricky Robison. Mr. Robison is survived by his son, Ray Robison and wife Denise of Deville, LA, brother-in-law, Albert “Doodle” Davis of Carthage; grandchildren, TJ Gaspard, Amber Laborde, Summer Steiner, and Cherokee Robison; great grandchildren, Madison and Macy Lejeune, and Mekena Laborde. Serving as pallbearers will be Glen Robison, Dennis Robison, Bobby Foster, Carl Bardwell, Steve Davis and Shannon Davis. Honorary pallbearer will be Jack McIllwain.

The family of Mr. Horace Robison created this Life Tributes page to make it easy to share your memories.

Send flowers to the Robison family.