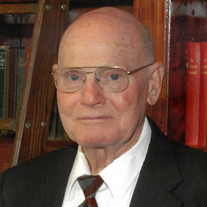 Funeral services for Mr. J.W. “Pete” Williams, 93, of Carthage, Texas will be 2:00 p.m. Sunday, February 13, 2022, at the First Baptist Church of Carthage with Dr. Allen Tilley and Rev. James Williams officiating. Burial will follow in the Restland Memorial Park Cemetery under the direction Hawthorn Funeral Home. Visitation will be 5-7:00 p.m. Saturday, February 12, 2022, at First Baptist Church of Carthage. Mr. James Wolsey “Pete” Williams was born December 19, 1928, in Gary, Texas. He passed this life February 9, 2022, peacefully at his Carthage home. Pete was one of thirteen children born to the marriage of Dudley and Myrtis Melinda Nolan Williams. He was raised and completed schools in Gary, Texas. Mr. Williams served his country through the U.S. Army. He married Shirley Ann Hayes October 29, 1961, and they celebrated 60 years of marriage and three children. Mr. Williams began his career in television repair in 1954 and came to own and operate the Williams T.V. Repair. After his retirement he began his career in funeral service for Hawthorn Funeral Home serving as their chaplain and serving hundreds of families in their time of need. Pete was a member of the First Baptist Church since 1984, where he ushered and served as a deacon. He taught the Sunday devotional service at Winkler House for many years. Pete was a devoted friend to all who knew him and if you knew him, he prayed for you and yours. He is preceded in death by his parents; brothers, Billy and Bud Alford Williams; sisters, Dora Pendley, Dorothy Griffith, Trudy Kelley, Sue Kilpatrick, Mellie Joslin, and Jane Morris. Mr. Williams is survived by his loving wife Shirley Williams of Carthage; children, Rev. James Williams and wife Kym of Bryan, Linda Horn and husband Mark of Magnolia, and Billy Williams and wife Traci of DeBerry; sisters, Virginia Pace of Carthage, JoAnn Morris and husband Bobby of Chapel Hill, Melinda Jean Johns of Tyler, Cynthia Wray and husband Jim of Lindale; grandchildren, Katelynn Williams, Aubrey Leggett and husband Asa, Zach Horn, Brittney Williams, Jesse Williams, John Williams, and Bryan Ferguson; great grandchildren, Ella Belle Faucett, Colton and Hunter Leggett; sister-in-law, Bonnie Williams of Tyler and brother-in-law, Billy Morris of Chapel Hill; numerous nieces, nephews and a host of friends. Serving as pallbearers will be, Jesse Williams, John Williams, Zach Horn, Asa Leggett, Travis Williams, and Jared Williams; honorary pallbearer will be David Wooley. An online guestbook may be signed at www.hawthornfuneralhome.com

The family of J.W. "Pete" Williams created this Life Tributes page to make it easy to share your memories.