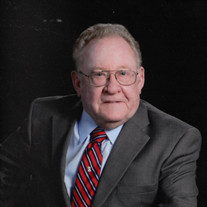 Funeral services for Mr. Jackie L. Brewster of Longview, Texas will be held on Saturday, March 26, 2022, at 12:00 p.m. at the chapel of Hawthorn Funeral Home with Rev. Bobby Earl Moore officiating. Interment will follow in the Walton Cemetery in the Delray community. He served on the cemetery board for over 20 years, ten of those as its chairman. The family will receive friends at the funeral home from 11:00 – 12:00 on Saturday prior to the service. Jackie was born in the Delray community on July 25, 1935, to parents Joseph Gussie Brewster and Maggie Beatrice Lawrence Brewster. He joined Ebenezer United Methodist Church at an early age and remained a member of the congregation until he transferred his membership to Greggton United Methodist Church in Longview where he was active in all aspects of the church, including teaching Sunday school, and serving on almost all committees of the church, including chairman of the administrative board. When his brother-in-law, Bobby Moore, accepted the pastorate of Greggton First Baptist Church, he and Jere transferred to that church. He was baptized into the Baptist faith, ordained a deacon in this church, and served this church faithfully in various capacities until his death. Jackie was proud of his heritage being a sixth generation “Texian”. His great, great, great grandfather, Lemuel Herrin, came to the Republic of Texas in 1834. Rev. Herrin was a devout Baptist who organized several churches including Macedonia, Six Mile Church (now named Friendship Baptist Church) and First Baptist Church of Henderson, where he was preaching at his death. Jackie graduated from Carthage High School with the class of 1953. He attended Panola Junior College where he was elected president of the student body and then enrolled at East Texas State University where he received his BBA degree in 1958. While in high school, Jackie and four of his friends, Hubert Browning (deceased), Roy Brown, Alfred Posey and Dan Ross organized a country-western band called the East Texas Wranglers. They entered and won the state FFA talent contest and went to Kansas City, Mo. to play for the national convention. The band had a weekly radio show on Saturday afternoon on KGRI in Henderson, Texas and was the featured band for Mr. A.T. Youngs Marshall Jamboree. While attending Panola College, Jackie was a disc jockey at KGAS radio. He often said that the one and only highlight of his broadcast career was the opportunity to interview Johnny Cash who was on his way to the Louisiana Hayride and happened to hear Jackie playing “I Walk the Line” continuously and stopped by the studio. While in high school, he began to announce rodeos for the local high school event as well as the “Old Timers” event each year. He announced these rodeos for over 28 years as well as others during his college days and during the time of his military service. Jackie was also passionate about auctioneering. He was self-taught and picked the chant from listening to livestock auctioneers where he worked at various cattle auctions. People marveled at his ability to sell for 10-11 hours without stopping. He and his friend, James Goolsby, sold some of the most outstanding antique estate sales in East Texas. Upon graduation in 1958, he took a job at Carthage Truck & Tractor company owned by Mr. Cassity Jones and his brother Tom. The Jones brothers were just beginning to build houses and Jackie became involved in this part of the business. This involved custom built homes, supervising in construction and, sales. The company also got involved in subdivision development and from there expanding into the retail sales of building materials. In 1964, the company bought a small lumber yard in Nacogdoches and Jackie transferred there to manage the lumber yard as well as develop a subdivision. In 1966 the company bought another small lumber yard in Longview, Tx, and Jackie transferred there to manage that operation as well as develop another subdivision and build homes. He was a member of the Longview Homebuilders Association and served as President of this organization and was also a member of the Longview Board of Realtors. The company began to phase out of the subdivision and building business and concentrated on developing the retail part of the business. Over the next 20 years, the company evolved into “seven home centers” and “three carpet centers”. Jackie retired in 1998 after 40 years of service to the company, the last 15 as president. Mr. Brewster was preceded in death by his parents; two brothers who passed away at a young age, Freddie Hugh Vaughn, and Lenvol Alan Brewster; four sisters, Maurine Pelham, Elizabeth Ann Heard, Jeri Linda Tompkins and Pansy Betty Hollar. He is survived by his loving wife of 61 years, Jere Jane Moore Brewster; two daughters, Lisa Lynn Dykes and friend, Tony McCullouegh, and Melinda Kay Tidwell and her husband Tript; one sister, Freddie Nell “Cookie” Steele, and her husband John. He is also survived by four grandsons, Brandon Wayne Dykes, Matthew Reuben Dykes and his wife Kaitlyn, Ethan William Tidwell and Carson Cole Tidwell. He is also survived by a host of nieces, nephews and friends. Serving as pallbearers will be David Moore, Jason Moore, Brandon Dykes, Matthew Dykes, Ethan Tidwell and Carson Tidwell. Honorary pallbearers will be the surviving members of the East Texas Wrangler Band. In lieu of flowers, the family suggest memorials be made to the Cystic Fibrosis Foundation at www.cff.org An online guestbook may be signed at www.hawthornfuneralhome.com

Funeral services for Mr. Jackie L. Brewster of Longview, Texas will be held on Saturday, March 26, 2022, at 12:00 p.m. at the chapel of Hawthorn Funeral Home with Rev. Bobby Earl Moore officiating. Interment will follow in the Walton Cemetery... View Obituary & Service Information

The family of Mr Jackie Brewster created this Life Tributes page to make it easy to share your memories.

Send flowers to the Brewster family.