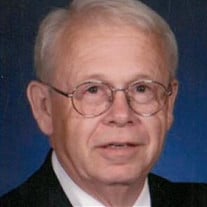 Funeral services for Mr. James Don Jones, 74, of Winnfield, LA will be 11:00 a.m., Friday, July 27, 2018 at the Hawthorn Funeral Home Chapel with Dr. Dale Reed officiating. Burial will follow in the Restland Memorial Park Cemetery under the direction of Hawthorn Funeral Home. Visitation with the family will be 10-11:00 a.m. prior to the service at the funeral home. Mr. James Don “J.D.” Jones was born June 16, 1944 in Shreveport, Louisiana and passed away July 23, 2018 in Shreveport, LA, on what would have been his 35th wedding anniversary. He was the oldest of three children born to the marriage of J.D. and Lavone Burdine Jones. He was raised and schooled in Winnfield, Louisiana graduating from Winnfield Senior High School with the class of 1962. He was a three time Louisiana football All State Champion and received a full scholarship to play for Georgia Tech where he earned his Bachelors in Industrial Engineering. He married Jill Willis July 23, 1983 and they celebrated 20 years of marriage before she preceded him in death in 2003. Don was a community minded man as a member of the First Baptist Church of Winnfield, the Elks Lodge of Shreveport and Lions Club in Winnfield. He loved helping others and spending time outdoors. He is also preceded in death by his parents. Mr. Jones is survived by his children, Darrell Jones and wife Jessica of Shreveport, LA, Barbie Frizell and husband Paul of Shreveport, LA, Cassie Gilmore of Perry, Iowa, Shawn Moss of Lake Worth, FL, John Patrick DeWald and wife Stephanie of Chesapeake, Virginia; sisters, Carolyn Beaudion and husband Michael of Shreveport, LA, Sarah Scott and husband Howard of Shreveport, LA; six granddaughters; six grandsons; four great grandchildren and one more on the way; many other relatives and a host of friends. An online guestbook may be signed at www.hawthornfuneralhome.com.

The family of Mr. James Don Jones created this Life Tributes page to make it easy to share your memories.

Send flowers to the Jones family.