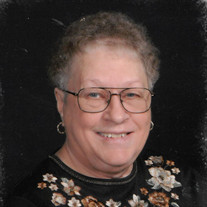 Memorial services for Mrs. Janene Ann Gossett, 78 of Carthage, Texas will be 11:00 am, Tuesday, July 30, 2019 in the Hawthorn Funeral Home Chapel with Rev. Monty Pierce officiating. Cremation arrangements are entrusted to Hawthorn Funeral Home. Visitation will be Monday evening, July 29, 2019 from 5 – 7:00 pm at the funeral home. Mrs. Janene Ann Gossett was born January 5, 1941 in Lyons, Kansas and went to her heavenly home on Friday, July 26, 2019. Janene was raised by her mother and stepfather, Bernice and Jack James. She was a graduate of Lorraine High School with the class of 1959 and Barton County Community College in Great Bend, Kansas. Janene met and later married James Charles “Buddy” Gossett on October 17, 1964 in Kansas and together they celebrated over 54 years of marriage. In her career as a nurse, she worked in many different hospitals including ones in Great Bend, Kansas, Mason City and Des Moines, Iowa and Joliet, Illinois. Janene was a member of Central Baptist Church. She loved to sew and cross stitch children’s clothing and spend time with her family and friends. She was preceded in death by her parents and in-laws, Cecil and Horace Gossett. Mrs. Gossett is survived by her loving husband, James Charles “Buddy” Gossett; daughters, Dana Gossett and Jill Gossett; sister, Billie Mercer; sister-in-law, Shirley Arnold and husband Eddie; nieces, Shawn Crane and Tracy Chapman and husband Jeff; nephews, Devin Mercer and Tony Arnold; as well as numerous other relatives and a host of friends. Memorials may be made to Central Baptist Church Mission Fund.

The family of Mrs. Janene Ann Gossett created this Life Tributes page to make it easy to share your memories.

Send flowers to the Gossett family.