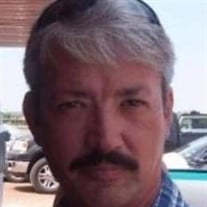 Funeral services for Mr. Jeff Hulsey, 59, of Gary, Texas will be 2:00 p.m. Thursday, September 30, 2021 at the Still Waters Cowboy Church with Rev. Matt Comer and Bro. Jason Parrot officiating. Burial will follow in the Mt. Bethel Cemetery in Gary, Texas. Visitation will be 1-2:00 p.m. Thursday prior to the service. Mr. Jeff Dean Hulsey was born October 18, 1961 in Pauls Valley, Garvin County, Oklahoma. He passed this life September 23, 2021 in Tyler, Texas. He was one of two children born to the marriage of Lemuel Virgil and Yvonne Jeffress Hulsey. He was raised in Gary, Texas, schooled in Carthage with the class of 1981 and graduated in Gillette Wyoming. He attended E.T.B.U. in Oklahoma and Letourneau University before he joined the U.S. Navy. He served through 1995 later working for Brown and Root and a caregiver to his devoted sister. Jeff was a devoted member of the Still Waters Cowboy Church. He loved to witness and prayed beautifully. He spent his time fishing, gardening, and sharing what he grew with family and friends. He is preceded in death by his father; both grandparents, Buddy and Naomi Jeffress, Addie and Virgil Hulsey. Mr. Hulsey is survived by his mother, Yvonne Hulsey Pierce of Gary, sister, Laura Annette Hulsey of Gary; half-brothers, Wayne Hulsey of Phonex, AZ, and Gary Hulsey of Pauls Valley, OK; numerous aunts, uncles, cousins and friends. Serving as pallbearers will be Jacob McBride, Dalton McBride, Phillip Essery, Jimmy Becker, James Sims, and Brody Kilpatrick. An online guestbook may be signed at www.hawthornfuneralhome.com

The family of Mr. Jeff Dean Hulsey created this Life Tributes page to make it easy to share your memories.

Funeral services for Mr. Jeff Hulsey, 59, of Gary, Texas will...

Send flowers to the Hulsey family.