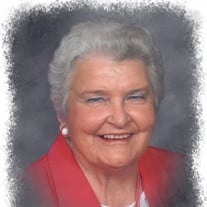 Funeral services for Jerry Dickson who passed away September 9, 2021, will be held Sunday, September 12, 1:30 p.m. at Hawthorn Funeral Home with Reverend Monty Pierce and Reverend Steve Jackson officiating. Interment will be in Six Mile Cemetery. Visitation will be 1-1:30 pm Sunday at the funeral home. Mrs. Dickson was born March 27, 1932, near Clayton, Texas to Wendell and Adell Bush Raybun. Jerry graduated from Carthage High School in 1949. She earned her nursing degree in Dallas before going to X-Ray School. She graduated from Parkland Hospital School of X-Ray Technology in Dallas, Texas in 1954 as a registered x-ray technician, she then went on to graduate from Howard Payne University in Brownwood, Texas in 1959 with a B.S. degree and a teaching certificate in Biology. She worked at a clinic in Hereford, Texas, and a hospital in Alpine, Texas as an x-ray technician. She worked in the Carthage ISD as a nurse under Lou Tatum. She served as a pastor’s wife for twelve years. After her husband resigned the pastorate because of health reasons, they moved to Marfa, Texas for her husband’s new job. Jerry owned and operated two retail businesses in Marfa: Jerry’s Uniforms and T-Shirts West. Mrs. Dickson started her uniform store, Jerry’s Uniforms, as a sideline in her home in 1974. As the business grew, she moved it to a location downtown. The business continued to grow with customers nation wide and the Army in Old Mexico. She specialized in government uniforms. She was asked to supply Little League baseball uniforms and caps for the area, so Mrs. Dickson opened a second business, T-Shirts West. In addition to the baseball uniforms, she had a thriving business with custom design t-shirts. Her biggest seller was designed by a 10-year-old boy who made the statement, “Who needs Luckenbach Texas? I’ve been to Marfa”. She put it on a t-shirt and the tourist loved it. During this time, Mrs. Dickson was also Manager of the Chamber of Commerce. While living in Marfa she served as President of the Marfa History Club, served as Chairman of the Board of Western District Federation of Women’s Club, served as Chairman of the Board of Kiddie Koral Daycare Center, President of the Marfa Band Boosters and was a member of the Friends of the Library. She was an active member of the first Baptist Church and served as Treasurer and taught a Sunday School Class. After selling her two businesses she worked as an Outreach Coordinator then Interim Director for Alpine Family Crisis Center in Alpine, Texas. While working there she became a licensed Social Worker for the State of Texas. While living in Marfa she was selected as Career Woman of the month and also the first woman to be named Outstanding Citizen of Marfa at the Chamber of Commerce annual banquet. Mrs. Dickson also received the Community Achievement Award given by the Marfa Chamber of Commerce. She and her husband Gene moved back to Carthage in 1991. Jerry was a faithful member of Central Baptist Church in Carthage, Texas since 1991. She enjoyed helping others more than anything else. She served as Central Baptist Church Chaplain to the local nursing homes and many times made over 100 visits a month to the patients in Panola County. While attending Central, she was on numerous committees. Jerry grew up fishing and hunting with her father and never lost the love of doing both. She had her pilots license and motorcycle license and spent hours enjoying both. Jerry loved to play golf and usually played with her oldest son, Dick. She enjoyed watching football and NASCAR Racing on TV and played cards, board games and 42. She was an avid reader and had a personal library of over 2500 books. Jerry was preceded in death by her father, Wendell Raybun, her mother Adell Bush Wiley and stepfather A.P. Wiley II, her sister Mary Lynn Lee and husband Dick Lee, Half-brother, Andrew P. Wiley III, stepsisters Anna Mae Bishop and Druann Wiley of Beaumont, Texas. Survivors include her loving husband of 65 years, Gene E. Dickson, Three Children, Dick Dickson of Ridgecrest, California, Vicki Hurley of Carthage, Texas and David Dickson and wife Patty of Lexington Park, Maryland and adopted brother, James Ruddell of Dallas, Texas, Grandchildren Robert and Paige Dickson, Christopher, Shane and Chesney Hurley, two great grandchildren, one nephew and great nephew, also first cousins Charles Thomas of Longview and David and Billy Bush of Carthage, Texas and a host of other family members and friends. Memorials may be made to Central Baptist Church Remodeling Fund, 220 W. Sabine, Carthage, Texas 75633- or Six Mile Cemetery, P.O. Box 6, Judson, Texas75660.

The family of Mrs. Jerry Lucille Dickson created this Life Tributes page to make it easy to share your memories.

Funeral services for Jerry Dickson who passed away September...

Send flowers to the Dickson family.