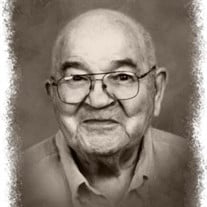 John George Morrison was born May 10, 1925 to Harry and Elizabeth Davis Morrison in Martinton, Illinois, a small farming community about 70 miles south of Chicago. He died peacefully at his home near Chireno, Texas on August 5, 2020 at the age of 95. A private graveside service is being celebrated in Odd Fellows Cemetery in Carthage, Texas. You could not know John long without discovering his live for singing. His talent came naturally, and he had a little dance band during high school in which he sang and played the trumpet. Three days after graduating from high school in May 1943, he enlisted in the Army Air Corp where he trained as a ball turret gunner. It was while stationed at Lowery Field in Denver, CO that he met and soon married Bobbie Henderson. After leaving the armed services in 1946, they settled in the Houston area and reared two sons, Jonathan Lee, and Gary Alan. John pursued several entrepreneurial ventures. He enjoyed working for himself. At one point, he owned a paint and wallpaper store in the Lakewood area of Houston where he was honored in 1959 by the local Merchants Association for “outstanding promotions and effective leadership.” This work led to a distributorship for Cook’s Paint and Wallpaper Company. Later he had a Real Estate business in the Spring Branch area. At the same time, he also owned a string of laundromats. In the mid 1970’s John and Bobbie moved to Katy, Texas and established BG’s Fried Chicken. He also owned City Café in Brookshire. If that were not enough to keep him busy, he continued his real estate business as John Morrison & Associates and belonged to the Katy Chamber of Commerce. Ever the Renaissance Man, John loved golf, gardening, painting, history books, and most of all singing. John never knew how to be idle. He was elected Mayor of Katy (1979–1983). During this time he served the Harris County Mayors and Councilmen’s Association as secretary (1980-1981), Vice-President (1981-1982), and President (1982-1983).He was president of Texas Municipal League Region 14 (1981-1982). He has been an active member of Lakewood Merchants Association serving as 2nd president. In 1962-63 he was president of Rotary of Northeast Houston. In 1974-75 he was president of Kiwanis Club of Spring Branch. He served as the chairman of the Katy Area Houston Board of Realtors in 1987. John was a very active member of Katy First United Methodist Church where he taught Bible lessons to a large Sunday School class. In 1992, at the young age of 67, John answered the call to full time ministry. As calls often do, this one uprooted John and Bobbie and planted them in Carthage, Texas, In the following years he served at four Methodist churches in that area (St. Andrews, Murvaul, and Woods as head pastors and First United Methodist of Carthage as an associate pastor), winning evangelism awards and leaving his churches revitalized. It was during this time that Bobbie went to be with the Lord, They had been married 62 years. In 2007 John married Emily Hester and moved to her home outside the small farming community of Chireno, Texas. It was a fitting circle. Back to the country. They sang with a small group that goes to nursing and assisted living homes (but he did not revive his trumpet). And every day he lived out his last line of the senior play in high school – AGE DOES NOT STALL THE HEART THAT IS YOUNG! John is preceded in death by his parents, two brothers, Harry and Myron, and his wife Bobbie. He is survived by his wife Emily, brother Ross and wife June of Lancaster, PA; sons Johnathan and wife Jan of Socorro, NM, and Gary and wife Charlotte of Austin, TX; granddaughter Jennifer Adams and husband Kevin of Katy, TX; great grandchildren Bailey, Jonathan, Katie, and Scout Adams; grandchildren Loden and Cyan Lizaso of Carrollton, TX; and numerous nieces, nephews, and friends. Those wishing to honor Mr Morrison’s memory may send donations to Love In The Name of Christ, P.O. Box 630423, Nacogdoches, Tx 75963(www.loveincnac.org) or to the charity of your choice.

John George Morrison was born May 10, 1925 to Harry and Elizabeth Davis Morrison in Martinton, Illinois, a small farming community about 70 miles south of Chicago. He died peacefully at his home near Chireno, Texas on August 5, 2020 at the age... View Obituary & Service Information

The family of Rev John George Morrison created this Life Tributes page to make it easy to share your memories.

Send flowers to the Morrison family.