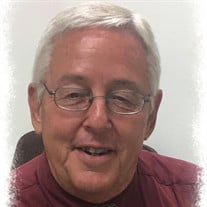 Funeral services for Mr. John Ulrich, 67, of DeBerry, Texas will be 1:00 p.m. Thursday, February 28, 2019 at the Hawthorn Funeral Home Chapel with Mr. Collin Jones and Mr. Justin Bradley officiating. Visitation will be 6-8:00 p.m. Wednesday night at Hawthorn Funeral Home. Mr. John Roland Ulrich was born August 29, 1951 in Tarrant County, Texas. He went to be with his Lord and Savior February 25, 2019 at his home in DeBerry. John was the oldest of three children born to the marriage of John Gwynne and Shirley Ann Fischer Ulrich. He was raised in Garland, graduating from South Garland High School with the class of 1969. He attended University of Texas in Austin. Mr. Ulrich served his country through the U. S. Army as well as the reserves from 1971-1977. He married the love of his life; Judy Marie Wilson in January of 1976 and they celebrated 43 years of marriage and raised two children in a loving home. Mr. Ulrich worked over 30 years as a service tech for AT&T before his retirement. John founded and pastored the New Life Baptist Church, refereed high school football, and was a member of TASO, (Texas Association of Sports Officials). John also had a heart for missions, and worked with, Good News in Action visiting, Costa Rica, El Salvador, Honduras, and Guatemala. He is preceded in death by his parents. Mr. Ulrich is survived by his loving wife Judy Ulrich of DeBerry; son, Zayne Ulrich and wife Jennifer of Russellville, AR; daughter, Melissa Jones and husband Collin of Abilene; sisters, Cheryl McRae and husband Ron of Missouri, Debbie Todaro and husband B.J. of Lorena, four beloved grandchildren, Zethan Ulrich, Ayden Ulrich, Tessa Jones, and Megyn Jones; numerous nieces, nephews and a host of friends. The family suggests memorials to the New Life Baptist Church, 474 CR 316, DeBerry, Texas 75639.

The family of Mr. John Roland Ulrich created this Life Tributes page to make it easy to share your memories.

Funeral services for Mr. John Ulrich, 67, of DeBerry, Texas will...

Send flowers to the Ulrich family.