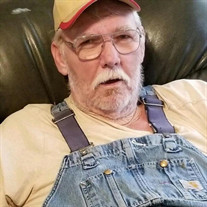 Graveside funeral services for Mr. John Edward Williams, 78 of Beckville, Texas will be 11:00 a.m., Thursday, October 15, 2020 in the Martin Cemetery with Dr. Dale Reed officiating. Burial will follow under the direction Hawthorn Funeral Home. Mr. John Edward Williams was born September 27, 1942 in Beckville, Texas and passed away October 11, 2020 in Tyler, Texas. Mr. John Edward Williams was the only born child to the marriage of Audie Elton and Ada Martin Williams. He was the apple of his mother’s eye. John, a Beckville native, was the great-great grandson of Daniel and Eleanor Martin, the first settlers of Panola County. He was a graduate of Beckville High School with the Bearcat class of 1961. Stricken with polio as a young child, John did not let his disability keep him from leading a successful life. He was one of the most accomplished heavy equipment operators of East Texas. In addition to being self-employed, he worked for various construction companies, including Longview Construction, McMann, Courtney, and Pierce Construction before his retirement. He was an avid outdoorsman, N.R.A. member, loved guns, skeet shooting, gardening, and his tractor. John is preceded in death by his father. John then devoted himself to his mother’s care until she preceded him in death as well. Mr. Williams is survived by his sons, Brad Williams and wife Jessie of Shreveport with a grandchild on the way, Jon Erik Hough and wife Jennifer McDaniel and their child, Jon Asher Hough all of Carthage; cousins, Carolyn Harmon and husband Conley of Longview, Ann Tuttle and husband Bobby of Beckville, Jetta Taylor of Longview, Brenda Pierce and husband Kenneth of Beckville, Lois Walker of Nacogdoches; many other relatives and a host of friends. The family requests memorials in his memory to Shriners Children’s Hospital.

The family of Mr. John Edward Williams created this Life Tributes page to make it easy to share your memories.