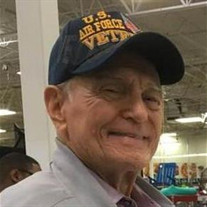 Funeral services for Mr. Joseph “Joe” Elliott, 88, of DeBerry, Texas will be 10:30 a.m., Saturday, March 2, 2019 at the Mt. Zion United Methodist Church with Rev. Tim Turner officiating. Burial with Military Honors will follow in the Panola-Mt. Zion Cemetery under the direction of Hawthorn Funeral Home. Visitation with the family will be 6-8:00 p.m. Friday evening at Hawthorn Funeral Home. Mr. Joseph Mason Elliott was born November 15, 1930 in Paducha, Texas to Leonard Prether and Fannie Wiener Elliott and passed away February 24, 2019 at his home in DeBerry. Joe married Jean Shepherd on May 2, 1953 and together they celebrated 51 years until she preceded him in death on June 26, 2004. He later married Kathleen Oliver on August 20, 2005 and celebrated 13 years together. Joe served his country through the United States Air Force, serving during the Korean Conflict, and retired on May 31, 1970 with 22 years of service and the rank of Master Sergeant. He was the owner of Elliott Maintenance Service for over 30 years, an ordained minister through Bethel Christian Center in California and a longtime member of the Mt. Zion UMC. Joe was an encourager who never met a stranger. He is also preceded in death by his parents; son, John Elliott; and brother, David B. Elliott. Joe is survived by his wife, Kathleen Oliver Elliott; children, David K. Elliott and Katherine A. Elliott all of DeBerry; numerous nieces, nephews, other relatives and a host of friends. Serving as pallbearers will be Bradd Olsen, Steve Auvil, C.F. Pope, David Turner, Bill Offer and Gary Saine.

The family of Mr. Joseph "Joe" Elliott created this Life Tributes page to make it easy to share your memories.

Send flowers to the Elliott family.