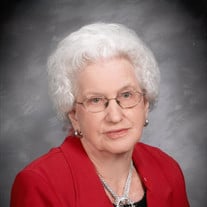 Graveside funeral services for Mrs. June Abernathy, 91, of Carthage, Texas will be 2:00 p.m. Monday, March 7, 2022, at the Antioch Cemetery with Dr. Allen Tilley officiating. Burial will follow under the direction of Hawthorn Funeral Home. Visitation will be 6-8:00 p.m. Sunday night at Hawthorn Funeral Home. Mrs. Ouida June Hightower Abernathy was born April 30, 1930, in the Antioch Community of Panola County, Texas. She passed this life March 2, 2022, in Clayton, Texas. She was one of twelve children born to the marriage of John Grig and Blanche Olivia Goodman Hightower. She was raised and schooled in Carthage graduating with the Bulldog class of 1946. June married her love George Daniel Abernathy March 4, 1947, and they celebrated 57 years of marriage before he preceded her in death in 2005. Mrs. Abernathy worked for the U.S. Postal Service for almost 30 years. She was the first woman carrier to walk a 13-mile route every day and served as postmaster for both Gary, Texas and Jefferson, Texas before her retirement in 1991. June was a lifelong member of the First Baptist Church of Carthage serving in the choir, as a Sunday school teacher, WMA Past President, and church clerk. She loved the outdoors, gardening, flowers and was a talented seamstress. She is also preceded in death by her parents, daughter, Jean Hisaw and brothers, Franklin, Reagan, Bud, and Johnny Hightower; sisters, Claudia Clay, and Corine Willoughby; Mrs. Abernathy is survived by her devoted daughter, Terri Reed and husband Richard of Clayton; loving son, Ronny Abernathy and wife Jo of The Colony; brothers, Danny Hightower of Texarkana, and Bob Hightower and wife Karen of Meeker, OK; sister, Anna Lee Minco and husband Jerry of OK; sister-in-law, Mary Hightower of Stratford, OK; grandchildren, Tina and J.T. Sponsler, Diane and Dan Gerardis, Dan and Ragen Reed, Allen and Laura Reed, Rachel and Jason Davis, Luke Abernathy, Matthew Abernathy, Jontomas Abernathy; thirteen great grandchildren; numerous nieces, nephews and a host of friends. Serving as pallbearers will be her grandchildren. The family suggests memorials in her name to the Antioch Cemetery or First Baptist Church of Carthage. An online guestbook may be signed at www.hawthornfuneralhome.com

The family of Mrs. June Abernathy created this Life Tributes page to make it easy to share your memories.

Send flowers to the Abernathy family.