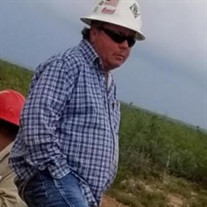 Memorial services for Mr. Kenny Finehout, 55, of DeBerry, Texas will be 4:00 p.m. Tuesday at the Hawthorn Funeral Home Chapel with Bro. Matthew Michel officiating. Cremation arrangements are entrusted to Hawthorn Funeral Home. Mr. Kenneth Eugene Finehout was born September 3, 1965 in St. Joe, Michigan. He passed this life December 17, 2020 at his DeBerry, Texas home. Kenny was one of four children born to the marriage of Donald Eugene and Gerry Laverne Blalock Spear. He was raised and schooled in Judsonia, Arkansas. He spent his career in the pipeline industry since the age of 17 working for Courtney Construction, Batallion Construction and Foss Energy. Kenny loved the outdoors, golfing, grilling and riding his side by side. He is preceded in death by his parents, and two brothers, Jeff Finehout and Mike Spear Mr. Finehout is survived by his wife, Janet Diane Clark Finehout of DeBerry; daughters, Jessica Finehout of Whitmore Lake, MI, Kendra Finehout of Whitmore Lake, MI, and Brandy Finehout of Canton; sister, Pam Finehout of Pittsburg; grandchildren, Keirrah Speakman, Ransom Willis, Reyna Willis, Karley Craver, Kaylee Craver and Brooklynn Craver; numerous other relatives and a host of friends. An online guestbook may be signed at www.hawthornfuneralhome.com

The family of Mr. Kenny Finehout created this Life Tributes page to make it easy to share your memories.

Send flowers to the Finehout family.