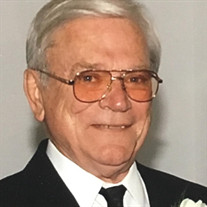 Memorial funeral services for Mr. L.T. “Chick” Cheshire, 84, of Carthage will be 10:00 a.m. Saturday, June 23, 2018 at the Hawthorn Funeral Home Chapel with Dr. Dale Reed officiating. Cremation arrangements were entrusted to Hawthorn Funeral Home. Mr. L. T. “Chick” Cheshire was born May 27, 1934 in Gary, Texas. Chick died June 20, 2018 in Carthage, Texas. He was the youngest of two children born to the marriage of Levi and Theo Adair Cheshire. Mr. Cheshire was raised in the Baptist faith, schooled in both Gary and Beaumont, and served his country through the U.S. Air Force during the Korean Conflict. L.T. worked throughout his career in the gas and oil field industry in pipeline construction for Haliburton and other companies. He is preceded in death by his parents, sons, David and Mark Cheshire, and sister, Myrtle Soape. Mr. Cheshire is survived by his son, Micah Cheshire and wife Katie of Farmdale, Ohio, mother of his children, Judy Cheshire of Forsyth, Missouri, grandchildren, Addison, Joel and Jarrett Cheshire all of Farmdale, Ohio, longtime friend and caregiver, Sam Miller and wife Betty of Carthage, other relatives and a host of friends. An online guestbook may be signed at www.hawthornfuneralhome.com.

The family of Mr. L. T. "Chick" Cheshire created this Life Tributes page to make it easy to share your memories.

Send flowers to the Cheshire family.