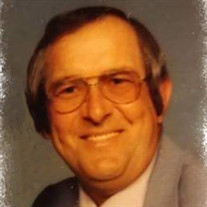 Graveside funeral services for Mr. Leo Porter, 80, of Carthage, Texas will be 10:00 a.m. Thursday, January 10, 2019 at the Murvaul Cemetery with Bro. Carroll Jones officiating. Burial will follow under the direction of Hawthorn Funeral Home. Visitation will be 6-8:00 p.m. Wednesday night at the funeral home. Mr. Leo W. Porter was born August 7, 1938 in the Murvaul Community of Panola County, Texas. He passed this life January 7, 2019 in Carthage, Texas, Leo was the oldest of two children born to the marriage of Oscar Lenward and Opal Jewel Moore Porter. He was raised in Gary attending schools there graduating with the class of 1957. He would serve his country through the U. S. Army from 1958-1970 honorably discharged as a sergeant. He married Pebble Clyde Britton and they celebrated 57 years of marriage before she preceded him in death in 2013. Leo worked patrol for the Carthage Police Department, as a purchasing agent for Trailmobile, and would retire from Louisiana Pacific as a saw mill supervisor and Bush Construction as a fabrication welder. Mr. Porter was a longtime member of the Murvaul Missionary Baptist Church where he served as Deacon. He loved hunting, fishing, and the outdoors with the family of grandkids he loved. He is also preceded in death by his parents. Mr. Porter is survived by his children, Tim Porter and wife Cindy of Murvaul, Lavon Porter Denson and husband Bill of Corsicana, and Paul Porter and wife Kathy of Murvaul; sister, Mary Lutes and husband Frank of Garrison; grandchildren, Jennifer Whitby and Justin of Gary, Mark Mutina and Sarah of Carthage, Ryan Mutina of Corsicana, Joshua Porter and Katherine of Murvaul great grandchildren, Jeremy, Jackson and Jaycee Whitby, Jaxsyn and Riley Mutina; nephews, Brad and Mark Lutes, other relatives and a host of friends. Serving as pallbearers will be, Mark Mutina, Ryan Mutina, Terry Ramsey, Tater Davis, Larry Lowe, and Robert Earl Mason; honorary pallbearers will be, Joshua Porter, Jackson Whitby, Jeremy Whitby, Jaxsyn Mutina, and Wade Bridwell. Special thnks to Briarcliff Healthcare Center and Hospice Plus for their care. An online guestbook may be signed at www.hawthornfuneralhome.com.

The family of Mr. Leo Porter created this Life Tributes page to make it easy to share your memories.

Send flowers to the Porter family.