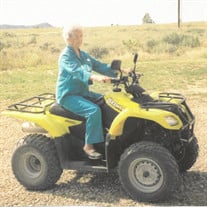 Funeral services for Mrs. Lottie Sullivan, 110, of Carthage, Texas will be 1:00 p.m. Thursday, October 31, 2019 at the Hawthorn Funeral Home Chapel with Rev. Steve Jackson officiating. Burial will follow in the Killeen Memorial Park Cemetery in Killeen, Texas. Visitation will be from noon to 1;00 p.m. prior to the service at the Hawthorn Funeral Home Chapel. Mrs. Lottie Lenore Hassell Sullivan was born March 8, 1909 in Dennison Springs, Texas. She passed this life October 28, 2019 peacefully at her Carthage, Texas home. Lottie was one of fifteen children born to the marriage of Thomas Franklin Lee and Henretta Martha Ann Ferguson Hassell. She was raised and schooled in Dennison Springs and completed schools in Beulah, Texas. Lottie attended Stephen F. Austin State University where she would meet and marry Adam Sullivan in 1928. Adam enlisted in the U.S. Army in 1929 and her life as an Army wife would begin until his retirement as a Colonel in 1954. Lottie worked together in many businesses with Adam from grocery stores, liquor, and malt shops. They would celebrate over 50 years of marriage before he preceded her in death in 1979. Mrs. Sullivan was raised in the Methodist faith and was a member of the Beta Sigma Phi Sorority in Nacogdoches. She lived a long and loving life, surrounded by the family and friends she loved. She is also preceded in death by her, parents; daughters, Billie Lou Sullivan Smith, and Kathleen Sullivan Myers; granddaughter, Belinda Myers Culp; grandson, Perry O. (Buddy) Myers; great grandson, Dustin Smith; and her fourteen siblings. Mrs. Sullivan is survived by her devoted son, John P. Sullivan of Carthage; loving daughter, Eileen Milstead Kerr of Carthage; 11 grandchildren; 16 great grandchildren; 9 great great grandchildren, numerous nieces, nephews, and a host of friends. An online guestbook can be signed at www.hawthornfuneralhome.com

The family of Mrs. Lottie Lenore Sullivan created this Life Tributes page to make it easy to share your memories.

Send flowers to the Sullivan family.