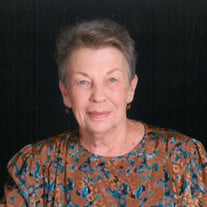 Memorial services for Mrs. Lynnell Wyatt, 77, of Gary, Texas will be 2:00 p.m., Sunday, January 13, 2019 at the Hawthorn Funeral Home Chapel with Bro. David Gradburg and Bro. Mike Wilson officiating. Visitation will be 1-2 p.m. prior to the memorial. Cremation arrangements were entrusted to Hawthorn Funeral Home. Lynnell West Wyatt was born January 27, 1941, in Azle, Texas. She was the fourth daughter of Ruth Bethel Cox and Henry Ervin West. After her parents divorced, Ruth married William Alonzo Price, who was Lynnell’s “daddy”. She is preceded in death by her parents and two sisters Joyce Shotwell and Nan Senn. On June 9, 1961, Lynnell married Bobby Ray Wyatt, who preceded her in death after 32 years of marriage. Lynnell and Bobby had three children – Charles Price, Bobbie Lynn, and Norman Ray. Lynnell was blessed to be a stay-at-home mom and homemaker until all her children had graduated from high school. She worked for the City of Gary for 16 years, a job she loved and was privileged to have until her retirement in 2005. She is survived by her son, Charles Wyatt and wife Sonya; daughter, Bobbie Lynn Davis and husband Scott; son, Norman Wyatt and wife Myrna; and sister Mary Wilson and husband Wheeler; grand-children, Cameron Ross Wyatt, Cassandra Lynnell Wyatt, Taylor Vaughn Wyatt, Jessica Rae Wyatt, Callie Megan Davis, Bailey Renea Wyatt, Trevin Scott Davis, and Chelsea Marie Wyatt. Numerous other relatives and a host of friends. The family would like to offer special thanks to Heartsway Hospice for their loving care. They request donations to Heartsway Hospice, St. Jude’s Children’s Hospital, and The Salvation Army.

Memorial services for Mrs. Lynnell Wyatt, 77, of Gary, Texas will be 2:00 p.m., Sunday, January 13, 2019 at the Hawthorn Funeral Home Chapel with Bro. David Gradburg and Bro. Mike Wilson officiating. Visitation will be 1-2 p.m. prior to... View Obituary & Service Information

The family of Mrs Lynnell Wyatt created this Life Tributes page to make it easy to share your memories.

Send flowers to the Wyatt family.