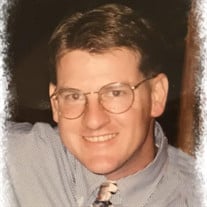 Marcus Edward Cooper, III had many identities: Marc, husband, father, son, brother, LSU fan, friend, woodworker, but the one we find most comforting is Christian. Because of Marc’s faith in Christ, he is now in Heaven with his parents, Ed and Minette Cooper, who both died just a few weeks ago. He was born on July 5, 1966 in Ruston, La. and died on May 2 in Van Alstyne, Texas after a two and a half year battle with colon cancer. His loving family was there to send him to his eternal home. He was a true fighter and inspired many with his will to live. Marc married April Parker Cooper on August 17 , 1996. He was a faithful, fun, loving husband. He was a devoted father to Christian Metcalf, Carolyn, Marcus and Tessa. He made sure that his family saw him as a safe place, but he also showed them how to enjoy life. He had a host of loyal longtime friends that we thank for the prayers and visits. He leaves behind his sister, Carolyn Goodwin (Chris) and 4 nephews: Jake (Morgan), Matthew, John David (Ashleigh) and Will as well as his mother in law, Carolyn Parker. Marc truly appreciated April’s brother, Michael Parker, who helped so much during his illness. Marc’s grandparents were Col. M. E. and Mary Cooper and A. K. and Dorothy Goff. Marc grew up in Shreveport, Louisiana and graduated from Captain Shreve High. He had a ball at LSU in Baton Rouge and graduated from La. Tech Barksdale. He moved to the corporate world but found his true passion and occupation in carpentry. He could make and fix anything, and his backyard was his happy place. We would like to thank all the family, friends and people we met along the way for all the prayers, love and support. We want to give a special thanks to Baylor Scott and White of McKinney and Dr. Palanisamy and their whole staff for holding our hands through this journey: A memorial service will be held for Marc and his parents at a later date.

Marcus Edward Cooper, III had many identities: Marc, husband, father, son, brother, LSU fan, friend, woodworker, but the one we find most comforting is Christian. Because of Marc&#8217;s faith in Christ, he is now in Heaven with his parents,... View Obituary & Service Information

The family of Mr. Marcus Edward Cooper III created this Life Tributes page to make it easy to share your memories.

Send flowers to the Cooper family.