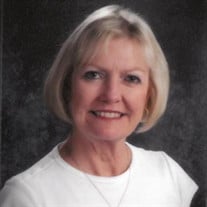 Graveside services for Ms. Martha Anderson, 66. Of Carthage, Texas, will be held at Rehobeth Cemetery, Hwy 59N, Carthage, TX at 4:00 pm Friday, April 30, 2021 with Reverend David Kennedy and Bro. Jerry Anderson officiating. Burial will follow under the direction of Hawthorn Funeral Home. The family will receive visitors from 6:00-8:00 pm Thursday, April 29, 2021 in the Hawthorn Funeral Home Chapel. Ms. Martha Howe Smith Anderson was born in Monroe, Louisiana on November 27, 1954 and peacefully passed to be with her loved ones at her home on April 27, 2021, surrounded by family and friends. Martha was born to the marriage of Mary ‘Kathryn’ Howe and Robert Baker ‘Cotton’ Smith. Kathryn and Cotton were blessed with the joy of twin girls, Martha and Marcia. Martha was preceded in death by her father in 1983 and her mother in 2015. She is survived by her loving and devoted twin Marcia Howe Smith Poss and husband Lonnie, her niece Leslie Holland Ham and husband Marty, all of Carthage; great-niece Kendall Hightower Russell and husband Dustin of Longview, Texas; and great-nephew Matthew Ham of Carthage; her life-long friend and life-long sister, Rhonda Allen Boyd and husband Mark of Houston, Texas; her friend for life, Richard Anderson of Carthage; and a multitude of cousins, friends, and extended family whom she loved dearly. Martha grew up in Houston, Texas until moving to Carthage to begin the eighth grade. She graduated from Carthage High School with the Class of 1973. While in school, Martha was active in sports and cheerleading. She attended Stephen F. Austin University where she received her Bachelor of Science in Education degree and Master of Education degree. She served on the Panola County SFA Alumni Scholarship Committee. Martha was of the Methodist faith and a devoted member of Rehobeth Methodist Church in Carthage where she served on various committees. Martha began her career as an educator in Henderson, Texas, where she taught sixth grade Gifted & Talented mathematics for six years. She then came to Carthage I.S.D. where she also served as a sixth-grade GT mathematics teacher for twenty-four years until her retirement in 2009. Martha enjoyed hunting, fishing, and all outdoor activities with her friends. Anyone who knew her was familiar with her daily ‘To-Do’ list. During her work years, she insisted upon completing her tasks before doing anything she deemed to be ‘fun’ after school. After retirement, she still had her lists; however, she did not mind carrying things over from day to day if something came along that she would rather do. Her life became more relaxed. Martha was always ready to travel with her friends and was proud to boast she had been to all but two of the United States. She looked forward to her trips with her Bagley Sisters and enjoyed the time with them and all their families. She considered them to be a part of her extended family and loved the nieces and nephews with all her heart. Martha never met a stranger. She made each of her friends feel that they were her very best friend-because they all were! She had the most wonderful sense of humor and would laugh at herself as much as anyone and we will all miss her jokes and infectious laugh. No one will miss Martha more than her twin sister, Marcia. They were as one and now she has lost a part of her person. Although, like most people, they had trials and tribulations to overcome. But at the end of each day, they did it with all the love in the world for each other. When together, they were a comedic duo that could always keep the crowd in stiches. Marcia will have the love and support of her husband, Lonnie, to see her through this most difficult time. Lonnie has been a wonderful, caring brother-in-law to Martha. Although Martha did not have children of her own, she was blessed to share Marcia’s with her. Leslie was like a daughter to her and this became so evident with the role she played as Martha’s caregiver during her final weeks. Leslie - along with her husband Marty and family Kendall, Dustin, and Matthew- has been there to provide all the care and support that one would expect from a child and grandchildren. Martha was so proud of each one of them. The family wishes to express their deepest, heartfelt appreciation for the love and care shown by family and friends who have been there during the past weeks to help with Martha’s care. A special thank you to Jessica and Winnie of The Hospice of East Texas for all the loving care they provided. The family asks that any memorials be made to Rehobeth Methodist Church, 126 CR 207, Carthage, TX 75633; Mission Carthage, P.O. Box 1208, Carthage, TX 75633; or St. Jude’s Children’s Hospital, 262 Danny Thomas Place, Memphis, TN 38105.

The family of Ms. Martha Howe Anderson created this Life Tributes page to make it easy to share your memories.

Send flowers to the Anderson family.