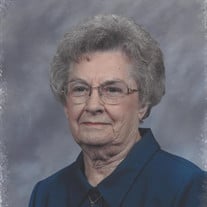 Mary Ann Robinson Holland, 98, passed away on December 23, 2020 at Briarcliff Skilled Nursing Center in Carthage, Texas. Due to the Covid pandemic, the family will have a private graveside service. Her grandson, John W. Duke, will officiate. She will be buried at Clayton Cemetery in Clayton, Texas under the direction of Hawthorn Funeral Home. Mary Ann was born on October 21,1922 to Millard and Ruth Middlebrook Robinson. She attended school in Clayton and Carthage and graduated with the Carthage High School Class of 1939. On August 25, 1940 she married William Raybun Holland, and they celebrated 55 years of marriage before his death in 1995. She was a member of First Baptist of Clayton, Texas. Mary Ann was very active in her church, her community, and in whatever activities her daughters were involved in. She worked at the Panola County tax office from 1961 until 1968. She enjoyed cooking, sewing, working on family histories, organizing and putting together many picture albums which included family pictures, history of Clayton, and history of the churches in Clayton. She loved her family and keeping up with the extended families. Her grandchildren remember her for the desserts that she always had in the freezer to share anytime they visited. They especially remember her brownies and “poppies” (popsicles that she froze in small cups just for them). She was a lifetime resident of Panola County. Mary Ann was preceded in death by her parents; husband; Johnny Saunders and Thomas Garrett, sons-in-law; David Michael Duke, grandson and Sue Parker, sister. Mary Ann is survived by her daughters Carolyn (William) Duke of Clayton, Texas and Rebecca Garrett of Charlotte, NC. She is also survived by grandchildren John Duke (Lydia), Robert Duke (Pam), Steven Saunders (Kathryn), Guy Saunders, and Bradley McClain (Rachel). She is survived by great grandchildren John Christopher Duke (Marguerite), Hannah Duke, Hunter Duke, Eliza Saunders, Kate Saunders, Lilly Saunders, Skylar Fink, T.J. McClain, and Donnie McClain. Also surviving Mrs. Holland are great-great-grandchildren John William Duke II, Anna Duke, Miriam Duke and another one due in March. She is also survived by Janelle Reed, sister, many nieces, nephews, cousins, and friends. Memorials may be made to the Clayton Cemetery (Kay Mauritzen) 2372 FM 1970, Carthage, Texas 75633.

Mary Ann Robinson Holland, 98, passed away on December 23, 2020 at Briarcliff Skilled Nursing Center in Carthage, Texas. Due to the Covid pandemic, the family will have a private graveside service. Her grandson, John W. Duke, will officiate.... View Obituary & Service Information

The family of Mrs. Mary Ann Holland created this Life Tributes page to make it easy to share your memories.