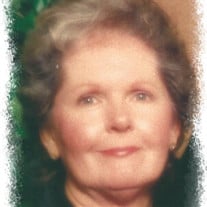 Melissa Humphrey Anderson (July 9, 1944 - April 19, 2019) has sadly lost her courageous years long battle with chronic pulmonary disease. Melissa (known to her grandchildren as “Noni”) was born in Brownsville, Texas, to Muir Burge Humphrey and Mary Evelyn "Peggy" Humphrey, where she spent a happy childhood. Her adulthood was spent in Houston, Texas where she raised her two children Dabney and Matthew. She then met and married Edgar “Andy” Anderson and when he retired, they moved to Andy’s hometown of Carthage, Texas. Melissa was a dry, cracking wit and a kind hearted member of the Carthage community. She was an involved member of her bridge club and member of the St. John’s Episcopal Church of Carthage, where she shared her enjoyment of others and faith in God. She was a fantastic cook, having held onto and making her mother and grandmothers’ Rio Grande Valley recipes. She would make chicken soup for church members or neighbors when they were sick, and would celebrate her time with family when they visited with her tacos, enchiladas, and Carlo Rossi Burgundy (always in a Tervis Tumbler Highball, and always packed with ice). She loved South Padre Island, Texas where she took vacations year after year with her family, and then later, with her children and grandchildren. As a young girl, she and Muir and Peggy would take a boat over to the island, which was undeveloped other than a few houses and beach shacks. The love she felt for those early trips ran through as a ley line of loving the sand, the surf, and the peace and quiet the island offered her and later, her family. Noni was an avid reader of many types of fiction and novels, she especially enjoyed science fiction, instilling a love of literature in her children and grandchildren. She was also interested in and did many handwork projects throughout her life, embroidering gifts and making pillowcases that are still in use by friends and family to this day. She loved to travel, and the adventures she and Andy would have around the world throughout their long and loving marriage, especially if the ocean/beaches were involved. Melissa “Noni” Humphrey Anderson is survived by her daughter Dabney Hilla and husband John; her son Matthew Garibay and wife Elizabeth; grandchildren Austin Hilla and wife Sarah Crass-Hilla, Evan and Gala Rose Garibay. She is preceded in passing by her husband Edgar “Andy” Anderson. A Memorial Service will be held for Noni at St. John’s Episcopal Church of Carthage on May 11th at 1:00 p.m.

The family of Mrs Melissa Anderson created this Life Tributes page to make it easy to share your memories.

Send flowers to the Anderson family.