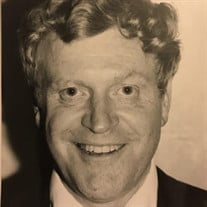 Merritt “Red” Marbach passed away peacefully on Monday, May 30, 2022, at the age of 94. He was the oldest of three sons born to Fred and Marie Marbach in Decatur, Indiana. After growing up on his family’s farm, Merritt attended Purdue University where he earned a B.S. in Chemical Engineering. He was a member of the U.S. Army from 1950 - 1952. Following his honorable discharge, he earned his M.S. in Chemical Engineering from Rose-Hulman Institute of Technology. He then joined Shell Chemicals where he spent the entirety of his career as a chemical engineer until his retirement in 1991. For many years, he was a devoted volunteer for Mended Hearts in Houston where he helped others during their recovery from heart surgery. He was a loving father, grandfather, great-grandfather, and great-great-grandfather to his large family. He enjoyed gardening, traveling, and square dancing. Though he was a man of few words, his quiet smile spoke volumes to those who knew him well. Merritt was preceded in death by his first wife Ellen Salyers, parents, stepson Ronald Risinger, second wife Dorothy Nutt Marbach, brother Monte Marbach, and son James Marbach. He is survived by his brother Terry Marbach; daughter Diane Marbach (Bruce Morgen) and stepson Ken Risinger (Janet); grandsons David Morgen, Chris, Kyle, Kurt, and Kenny Risinger; granddaughters Suzanne Morgen, Gena Hale, and Sheila Chandler; along with 21 great-grandchildren and 2 great-great-grandchildren. A graveside service will be held at Clayton Cemetery near Carthage, Texas, on Saturday, June 18, 2022, at 2:00 p.m. A memorial service will be held at the Abbey at Westminster Plaza in Houston, Texas, at a future date. In lieu of flowers, donations may be sent to Mended Heart at www.mendedhearts.org

Merritt &#8220;Red&#8221; Marbach passed away peacefully on Monday, May 30, 2022, at the age of 94. He was the oldest of three sons born to Fred and Marie Marbach in Decatur, Indiana. After growing up on his family&#8217;s farm, Merritt attended... View Obituary & Service Information

The family of Mr. Merritt "Red" Marbach created this Life Tributes page to make it easy to share your memories.

Merritt “Red” Marbach passed away peacefully on Monday, May 30,...

Send flowers to the Marbach family.