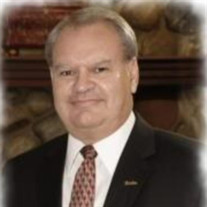 Memorial services for Mr. Mike Baughman, 70 of Henderson, Texas will be 11:00 a.m., Monday, December 7, 2020 at Calvary Baptist Church in Henderson with Rev. Luke Brown and Rev. Bill Kuykendall officiating. Cremation arrangements are entrusted to Hawthorn Funeral Home of Carthage. The family will receive friends one hour prior to service time. Mr. William Michael Baughman was born July 13, 1950 in Henderson, Texas. He passed this life November 23, 2020 in Tyler, Texas. Mike was one of three children born to the marriage of A.E. and Jane Watson Baughman. He was a native of Henderson graduating with the Lion class of 1968. He served in the Air Force Reserve, attended Kilgore College, University of Texas in Austin and obtained his bachelors from Stephen F. Austin University. Mike was a graduate of the Dallas Institute of Funeral Service. He began his career working for Bryan Funeral Home. He owned Baughman Monument Company, worked for the Rader Funeral Home in Henderson since its opening, retiring in 2018, and worked for Hawthorn Funeral Home in Carthage during his retirement. Mike met his soulmate later in life and married Henderson native, Beverly June Waller June 27, 1998. They spent 27 years together raising their beloved Jack Russell Terriers. Both he and Beverly were members of Calvary Baptist Church serving as directors for the Young Adult SSC and Mike sang in the choir. Mike was active in the Rusk County Airport, piloting since 1980. He love high school football, serving over 40 years announcing the games play by play as the voice of the Henderson Lions. He is preceded in death by his parents. Mr. Baughman is survived by his devoted wife, Beverly Waller Baughman of Henderson; brother, Jimmy Baughman of Henderson and sister, Patricia Spraker of Oak Ridge, TN, numerous nieces, nephews and a host of friends. The family request memorials be made to Calvary Baptist Church, 410 N. Marshall St., Henderson, TX 75652 or the Henderson Lions Football Booster Club, P.O. Box 1886, Henderson, TX 75653.

The family of Mr. Mike Baughman created this Life Tributes page to make it easy to share your memories.

Send flowers to the Baughman family.