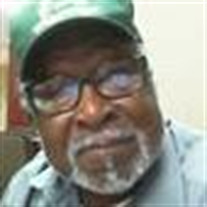 Funeral services for Mozell Holland, 77, of Carthage, Texas will be held Wednesday, April 7 at 2:00 pm in the Hawthorn Funeral Home Chapel with Reverend JT Harris, Chris Hardy, and T.L. Alison officiating. A viewing will also be held Tuesday, April 6 from 5:00-7:00 pm in the Hawthorn Chapel. Mr. Holland was born April 11, 1944 to the late Glynn & Minnie Alice (Booty) Holland in Panola County, Texas. He passed this life Sunday, April 4, 2021 at his Carthage, Texas home. He attended West Side Elementary School in the Holland Quarters Community and graduated from Turner High School in 1963. He served in the United States Army from 1964-1966. Following his army service, he returned to Carthage and was employed by Carthage Cup Company and later Schlumberger Well Services. Mozell later began Holland Answering Service in 1986 providing dispatch services to Schlumberger and Strong Well Services. He was a long-time member and deacon at Bethlehem Baptist Church. Everyone who knew Mozell knew of his love for his cows and land in Holland Quarters, or as he liked to call it, “God’s Country”. His friends were known to call him “Big Daddy" and on Friday nights you’d most likely find him listening to KGAS for the Bulldogs football game. When Sunday rolled around he'd be in front of the television watching the Dallas Cowboys. Though his favorite cap would often change, he never left the house without one. Mozell was preceded in death by his parents, brothers Nathaniel and Charles Ray and his sister Ila Jean Hayes. He leaves Gladys, his wife of 50 years, to cherish his memory; one son, Padraic Berry; three daughters, Ann Lockett-Williams, Teresa Lister (Gavin), Tiffany Maltezo (Van); and special daughter/granddaughter Prix Cooper (Kenneth); eight other grandchildren, TaRon, Brian, Britany, Hailee, Kenan, MiAsia, Christian and MiKayla; six great-grandchildren; one sister, Sedonia; his twin, Ozell, and brother, Elijah; sisters-in-law, Norma Holland, Ida Beck and Sharon Jones; and a host of nephews, nieces, other relatives and friends. Serving as Pallbearers will be Joshua Buffin, Juston Clough, Keith Johnson, Terry McGensey, Shannon Reeves, and Castural Thompson.

The family of Mr. Mozell Maurice Holland created this Life Tributes page to make it easy to share your memories.

Funeral services for Mozell Holland, 77, of Carthage, Texas will...