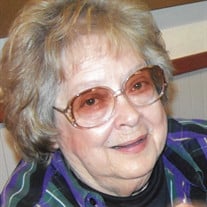 Funeral services for Mrs. Pat Wallace, 81, of Carthage, Texas will be 10:00 a.m. Tuesday, October 29, 2019 at the Hawthorn Funeral Home Chapel with Dr. Dale Reed officiating. Burial will follow in the Odd Fellows Cemetery under the direction of Hawthorn Funeral Home. Visitation will be 9-10:00 a.m. prior to the service at Hawthorn’s. Mrs. Patricia Raye Taylor Wallace was born November 23, 1937 in Talco, Texas. She passed this life October 27, 2019 in Longview, Texas. Patricia was born to the marriage of George Ray and Agnes Mae Smith Taylor. She was raised and schooled in Titus County, Texas. She received a singing scholarship to attend college in Snyder, Texas and would cut a vinyl record in her time. This would be the time she would marry her lifetime love, Escar Arnold Wallace who would precede her in death. Pat was a hard worker with a powerful personality, owning and operating several businesses; The Backdoor Restaurant, The Hometown Diner, Carthage Answering Service and worked as the dietary manager for Carthage Health Care and Panola Nursing Home. She was a longtime member of the Carthage Missionary Baptist Church. She is also preceded in death by her parents; and daughters, Angelia Wallace Allen, and Kandi Wallace White. Mrs. Wallace is survived by her son, Shaun Wallace of the Phillipines; grandchildren, Niki Holcomb and husband Eric of Carthage, Mandi Randolph and husband A.J. of North Richland Hills, Garrett Wallace and wife Beth of Gary, Kaitlin Drake and husband Rowdy of Beckville, Stephen White and wife Baylee of Carthage, Shauna Wallace of Gary; great grandchildren, Kaden, Lexi, Leah, Henry, Rylan, Darbi, Bowen, and Zoee, many other relatives and a host of friends. An online guestbook may be signed at www.hawthornfuneralhome.com

Funeral services for Mrs. Pat Wallace, 81, of Carthage, Texas will be 10:00 a.m. Tuesday, October 29, 2019 at the Hawthorn Funeral Home Chapel with Dr. Dale Reed officiating. Burial will follow in the Odd Fellows Cemetery under the direction... View Obituary & Service Information

The family of Mrs. Pat Wallace created this Life Tributes page to make it easy to share your memories.

Send flowers to the Wallace family.