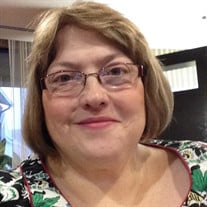 Regina Hope Dorris-Newman was born, along with her twin sister Rebecca Dorris-Smith, on October 5, 1959, to Mildred (Millie) Dorris and Curtis Edward Dorris in Hammond, Indiana. She entered her heavenly rest on September 15, 2019, at the conclusion of her second struggle with cancer. She was preceded in death by her parents, her twin sister, and her eldest sister Nancy Houser. She is survived by her husband Joe Newman, her beloved son Trent Newman, and sisters Billie Small of Orlando, Curtina Gilge and husband Norman, of Phillips, Wisconsin, and Darlene Contreras and husband Jack, of Chicago. In addition, she leaves behind many nieces, nephews, and cousins. Having lost her father and mother in death when she was aged 9 and 16, respectively, Regina lived with her Aunt Mary and Uncle Charles Brumley in Phillips, Wisconsin, after which she enrolled at North Central Bible College in Minneapolis, Minnesota, where she met, and became engaged to Joe Newman. They were married on May 23, 1981, and immediately set about to enter the Gospel ministry in the Assemblies of God denomination. From 1981 through 1988, Regina and Joe served as youth pastors at Longview First Assembly of God in Longview, Texas, assistant pastor at Grand Prairie First Assembly of God in Grand Prairie, Texas, and pastors of the Hite’s Chapel Assembly of God Church in Parkin, Arkansas. God blessed their marriage with the arrival of son Trent in 1985. He was, and remains, the cherished “apple of his mother’s eye.” In 1988, Joe accepted the position of Headmaster at Frayser Assembly Christian School in Memphis, Tennessee where Regina chiefly taught third grade. To this day, many of her students fondly recall their time in “Mrs. Newman’s” classroom as she poured her life into them. After serving many years at Frayser Assembly Christian School, Joe, Regina, and Trent moved to Louisiana, where they were elected pastors of Goldonna Assembly of God Church. Regina made many life-long friendships in Goldonna where the loving, caring congregation of Goldonna Assembly of God Church and the Newmans formed enduring bonds of fellowship and love. Arriving back in Memphis in 1998, Joe began teaching at First Assembly Christian School and Regina started a career with American Home Shield where she worked until her struggle with cancer forced her to take disability leave in 2018. Although, she was never able to return to work, she made many friends and was admired for her courage and strength by her colleagues at AHS. From the moment Regina was diagnosed with cancer in 2014 until her promotion to Heaven, she always wanted to be positive and a vocal witness for her precious Lord Jesus Christ, whom she served with all her heart to the very end of her days on this earth. The struggle with cancer demanded everything she had within her. Enduring multiple rounds of radiation, chemotherapy, and finally extremely complicated and painful surgeries, Regina fought bravely along with the medical staff of M.D. Anderson Cancer Center in Houston, Texas, to regain her health. Instead of complaining, Regina prayed with all the doctors, nurses, and others who entered her room and told them of God’s love and ability to help them despite their situations. Many returned to thank her for thinking of others while in the fight for her very life. Truly, the reach of Joe and Regina Newman’s ministry was multiplied many times as she witnessed of her Lord while in a hospital bed for the last year of her life. It is not often that we are privileged to know truly selfless people. They are rare gems. However, it is true of Regina Dorris-Newman that living a life wholly devoted to her God, her husband, her son, her family, her friends, and acquaintances, defined her. Always putting others first, she made you feel as though she had known you all her life upon your first meeting. Everyone was at ease around Regina because she truly loved and cared for them. God give us more like her. --

Regina Hope Dorris-Newman was born, along with her twin sister Rebecca Dorris-Smith, on October 5, 1959, to Mildred (Millie) Dorris and Curtis Edward Dorris in Hammond, Indiana. She entered her heavenly rest on September 15, 2019, at the conclusion... View Obituary & Service Information

The family of Mrs Regina Dorris Newman created this Life Tributes page to make it easy to share your memories.

Regina Hope Dorris-Newman was born, along with her twin sister...

Send flowers to the Newman family.