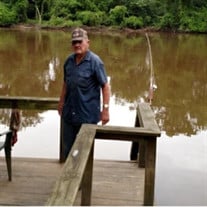 Graveside services for Mr. Roy Cole, 100, of Tatum, Texas will be 2:00 p.m. Saturday, February 13, 2021 at the Vinson Cemetery in Tatum, Texas. Burial will follow under the direction of Hawthorn Funeral Home. Visitation will be held from 12:00 noon until 1:00 p.m. Saturday prior to the graveside service at Hawthorn Funeral Home. Roy Heard Cole was born June 23, 1920. He passed this life February 9, 2021 in Henderson, Texas. Roy was born to the marriage of Ruben Wilson and Lucy May Turner Cole. He was raised and schooled in Tatum, Texas. He served his country through the U. S. Air Force, later drafted into the U.S. Army serving as a combat engineer. Roy married his love Flora D. Hammett Cole and they celebrated 77 years of marriage and had five children before she preceded him in death in 2018. Mr. Cole worked 19 years on the oil field. He later worked for R.G. LeTourneau as a machinist and shift manager before his retirement. He was a longtime member of Bethel Missionary Baptist Church almost 60 years. Roy loved fishing and any time outdoors on the river or the many ponds, lakes he fished all over the U.S. He is also preceded in death by his parents; brothers, Robert Cole, Cecil L. Cole, and Arvil Clark; sons, Royce, Delbert, Penny, Gaylon Cole, Betty Cole; and a grandson, Billy Cole. Mr. Cole is survived by his devoted children, Jean Cole of Henderson, Frank Cole of Tatum, and Rose Jones of Beckville; grandchildren, Jan Daniels, Glenn Daniels, Wayne Cole, Richard Cole, Jesse Cole, Linda Hebert, Debbie Taylor, Virgil Cole, Beverly Iltis, Ann Cole, and Bobbie Veinstra; and a host of Great grandchildren, and great great grandchildren. Serving as pallbearers will be Glenn Daniels, Wayne Cole, Jessie Cole, Richard Cole, Virgil Cole, Jake Daniels, Luke Daniels, and Thomas Taylor. The family requests memorials to the Bethel Missionary Baptist Church. An online guestbook may be signed at www.hawthornfuneralhome.com

Graveside services for Mr. Roy Cole, 100, of Tatum, Texas will be 2:00 p.m. Saturday, February 13, 2021 at the Vinson Cemetery in Tatum, Texas. Burial will follow under the direction of Hawthorn Funeral Home. Visitation will be held from... View Obituary & Service Information

The family of Mr. Roy Cole created this Life Tributes page to make it easy to share your memories.

Send flowers to the Cole family.