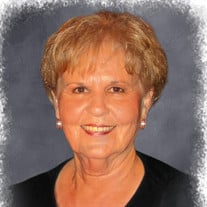 Private graveside funeral services for Mrs. Sally Seegers, 86, of Carthage, Texas were held, Friday, August 20, 2021 at the Odd Fellows Cemetery with Rev. Steve Wiggins and Bro. Scott Reeves officiating. Burial followed under the direction of Hawthorn Funeral Home. Mrs. Sally Sue Shirey Seegers was born March 28, 1935 in Mineola, Texas. She passed this life August 18, 2021 peacefully at her Carthage home. Sally was the older of two children born to the marriage of Truman L. and Sally Sickles Shirey. She was raised and graduated high school in Carthage, Texas. She married her love Bertis “Bert” Seegers in 1951 in Texarkana, Texas and they celebrated 61 years of marriage before he preceded her in death in 2012. Sally was a longtime member of the First Christian Church. She was an avid league bowler, loved working in her yard, shopping with family, friends, and being the patriarch and boss of the Seegers family. She is preceded in death by her parents, grandson, Brandon Seegers, and son-in-law, Philip Waldrop. Mrs. Seegers is survived by her loving family, sons, Gary Seegers and wife Trisha of Carthage, Mark Seegers and wife Donna of Dallas; daughters, Elizabeth Waldrop of Carthage, and Janet Davis of Carthage; brother, Truman Shirey and wife Patsy of Carthage; grandchildren, Kevin Waldrop of Carthage, Patrick Davis and wife Kirsten of Carthage, Erik Davis of Carthage, Lauren Seegers of Austin, Laken Seegers of Austin, and Blake Seegers of Carthage; and one great grandson, Michael Brooks Anderson; nieces, nephews and a host of friends. The Seegers family would like to express their grateful appreciation for the loving care given to our mother by her sitters Alvina Roberson, Lashoun Brown, Kim Thomas, and Jennifer Hinton.

The family of Mrs. Sally Seegers created this Life Tributes page to make it easy to share your memories.

Send flowers to the Seegers family.