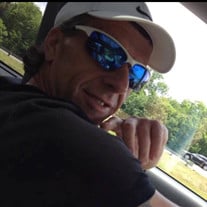 Clifford (Scott) Whitehead, 55, passed away on March 27, 2022 in his hometown of Carthage, TX. Scott was born on January 5, 1967 to Monroe and Helen Whitehead in Florida. Scott attended school in Marshall until the family moved to Carthage, Texas. In his high school years, he played football for the Carthage Bulldogs and graduated with the class of 1985. Scott was a jack of all trades. He worked many years for TXU Energy and had a talent for auto mechanic and body work, in which he held numerous certifications in. He held mechanic jobs in Houston, Pearland, Flatonia, and for a year in Washington DC. He joked that he got back to Texas as fast as he could. He was also a very talented “air” drummer. He could play the air drums without missing a beat to every Van Halen song ever written. You could usually hear Van Halen blasting from his stereo a mile away before you saw him. He loved hot rods, Nascar, motorcycles, cruising through town with his windows down and visiting with his friends. He could assemble things without ever reading the directions and repair anything you handed to him. Scott was the youngest in the family and was raised with his brothers Mark and Steven and his loving mother. He maintained a relationship with his Dad and step-mom in Arkansas until their passing. Scott believed his greatest accomplishment was his daughter Jessica. Although life took him in a different direction for many years, he kept her in his heart. He always said he couldn’t believe something so pretty came from him. He reconnected with her in recent years and was very proud of her and his 3 grandchildren. Scott knew what it was to love, and to forgive those in his circle as Christ unconditionally loved and forgave each of us. He said his circle was small, might even call it a dot, but those in the dot knew “ride or die” was true to his heart. In the last chapters of his life he overcame many struggles, mended relationships and was a loyal friend to many. He would help anyone who asked, even when he had nothing to give but his time and a listening ear. A fitting remembrance for Scott can be found in the lyrics of Wolfgang Van Halen’s song “Distance” which he wrote for his Dad, Eddie Van Halen. “I’m so happy you’ve found a place that’s better for you than this rock we’re living on” Scott was predeceased by his mother, Helen Whitehead Warner and husband JT Warner, father Monroe Whitehead and wife Lois, brothers Mark and Steven Whitehead. He is survived by his beautiful daughter, Jessica Whitehead Harper and her husband Travis, and their children, Braden, Brody and Riley. Memorial graveside services for Mr. Scott Whitehead will be at 11:00 a.m. Saturday, April 9, 2022, graveside at the Odd Fellows Cemetery. His ashes will be laid to rest beside his loving mother. In lieu of flowers, the family requests donations be made to The National Pancreas Foundation.

Clifford (Scott) Whitehead, 55, passed away on March 27, 2022 in his hometown of Carthage, TX. Scott was born on January 5, 1967 to Monroe and Helen Whitehead in Florida. Scott attended school in Marshall until the family moved to Carthage,... View Obituary & Service Information

The family of Scott Whitehead created this Life Tributes page to make it easy to share your memories.

Send flowers to the Whitehead family.