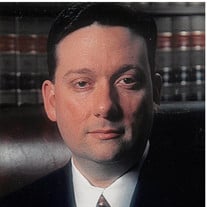 Funeral services for Mr. Stephen C. Mahaffey, 59, of Carthage, Texas will be 10:00 a.m. Wednesday, April 20, 2022, at the First United Methodist Church of Carthage with Rev. Kevin Otto officiating. Cremation arrangements were entrusted to Hawthorn Funeral Home. His ashes will be laid to rest in Restland Memorial Park Cemetery. Visitation will be 6-8:00 p.m. Tuesday night at Hawthorn Funeral Home. Mr. Stephen Claiborne Mahaffey was born April 20, 1962, in Oklahoma City, Oklahoma. He passed this life April 13, 2022, at his home in Carthage, Texas. Stephen was the younger of two sons born to the marriage of Robert E. and Calla Deaton Mahaffey. He was raised and schooled in Chicago, Illinois and graduated high school in New Orleans, Louisiana. He graduated from University of Texas with a degree in Journalism and received his law degree from University of Texas as well. Stephen married Sherry Lynn Roberts January 4, 1986. Together they had two sons and a daughter he was so proud of. Mr. Mahaffey worked with the law firms, Bishop and Hummert in Dallas and Rhone, Hootdenpyle, Loberts and Myers before he and wife Sherry partnered the Mahaffey and Mahaffey Law Firm in Carthage, Texas. Stephen was a dedicated member of the First U.M.C. of Carthage serving on the Board of Trustees, staff parish committee and taught the Agape Sunday School Class. He loved the outdoors, golfing, and fishing with good friend Dr. Johnny Majors and spending time with his loving family and friends. He is preceded in death by his parents, and loving aunt and uncle Doyle and JoAnn Beavers. Mr. Mahaffey is survived by his loving wife Sherry Mahaffey of Carthage; daughter, Anne Alise Mahaffey of Carthage; sons, Stephen Claiborne Mahaffey, Jr., of Carthage and Jackson Cole Mahaffey of Carthage; brother, Scott Mahaffey and wife Kathi of Ft. Worth; other relatives and a host of friends. Serving as pallbearer will be Johnny Majors, Jim Cox, Jack Mahaffey, Clay Mahaffey, Scott Mahaffey, Mike Newman, Chris Mahaffey and Seth Blake.

The family of Mr. Stephen C. Mahaffey created this Life Tributes page to make it easy to share your memories.

Send flowers to the Mahaffey family.