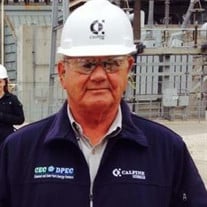 A memorial visitation for Mr. Tommy Weaver, 71 of Carthage, Texas will be 2-4:00 p.m. Sunday, May 19, 2019 at the Hawthorn Funeral Home. Cremation arrangements were entrusted to Hawthorn Funeral Home. Mr. Samuel Thomas “Tommy” Weaver was born November 11, 1947 in Minden, Louisiana. He passed this life May 13, 2019 in Carthage, Texas. He was the older of three sons born to the marriage of Samuel Thomas and Milla Dean Hathorn Weaver. Tommy was raised in Carthage, his family was active in Central Baptist Church and he graduated with the CHS class of 1965. He earned his Bachelor of Science in Industrial Technology through Texas A&M graduating in 1969 as a distinguished student and Iota Lambda Sigma Honor Society member. He married Johnnie Kathleen Warner on June 19, 1971 and she preceded him in death on May 27, 1999 after almost 28 years of marriage. Tommy’s career began with General Electric, working 26 years as an engineer and business manager all over the U.S. He worked for Sithe Energy in Canada, Tractabel in Virginia, and Calpine in Houston, Texas before retiring. Mr. Weaver was active in community through his work with charities. He was involved in Sarah’s House Women’s Shelter in Pasadena, Texas, establishing a golf tournament to support this and other shelters, and the Shriners Hospital for Children in Galveston. In 2016, Tommy would retire and return to Carthage where he was raised, being closer to family and joined the First Baptist church of Carthage and the Men’s Sunday School Class. He is also preceded in death by his parents; and a brother Bob Eddie Weaver. Mr. Weaver is survived by his son, Samuel Thomas Weaver, III and wife Melinda of Carthage, Texas; daughter, Angela Weaver Law and husband Greg of Riverton, UT; brother Rodney Kirk Weaver and wife Linda of Carthage; grandchildren, Colton and Casey Law; grandchildren, Blake Clift and Jolee Polk; nieces, nephews, cousins and a host of friends. The family suggests memorials to, Sarah’s House; 711 Perla Rd., Pasadena, TX 77502. An online guestbook may be signed at www.hawthornfuneralhome.com

The family of Mr. Tommy Weaver Jr. created this Life Tributes page to make it easy to share your memories.

A memorial visitation for Mr. Tommy Weaver, 71 of Carthage, Texas...

Send flowers to the Weaver family.