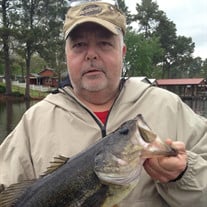 Funeral services for Mr. Tony Hight, 64, of Gary, Texas will be 10:00 a.m. Monday, September 21, 2020 at the Hawthorn Funeral Home Chapel with Rev. Dale Walker officiating. Burial will follow in the Mt. Bethel Cemetery under the direction of Hawthorn Funeral Home. Visitation will be 4-7:00 p.m. Sunday, September 20, 2020 at Hawthorn Funeral Home. Mr. Anthony Dean “Tony” Hight was born October 20, 1955 in Carthage, Texas. He passed this life September 16, 2020 at his Gary, Texas home. Tony was the youngest of three children born to the marriage of Ernest Glen and Lucille Cranford Hight. He was raised and schooled in Gary graduating with the Bobcat class of 1974. He married Dorothy Elaine Thompson March 5, 1982 and they celebrated 38 years of marriage and had two children. Mr. Hight worked 17 years for Winn Dixie as assistant manager and 29 years as an E.M.T. in Carthage and Panola County. He was a member of the Murvaul Missionary Baptist Church. He loved the outdoors, fishing and spending time with grandkids, family and friends. He is preceded in death by his parents, sister, Ruth Lovell; and brother Bill Hight. Mr. Hight is survived by his devoted wife Elaine Hight of Gary; son, Brent Hight and wife Brooke of Troup; daughter, Lacy Hight and Jacob Knight of Gilmer; grandchildren he adored, Emma, Easton, and Everett Hight all of Troup, Jax Anthony, Jacob, and Jaydan Knight all of Gilmer; special cousin, Judy Andrews of Carthage and neice, Kristi Pitts and husband Terry of Huntington; many other relatives and a host of friends. Serving as pallbearers will be, Kyle Weatherford, Stacey Cranford, Chris White, Chris Gilbert, Cody Gilbert, and Steven Andrews, honorary pallbearers will be, Adam Holt, Leroy Cranford, Delbert Cranford, and Donnie Andrews. An online guestbook can be signed at www.hawthornfuneralhome.com

Funeral services for Mr. Tony Hight, 64, of Gary, Texas will be 10:00 a.m. Monday, September 21, 2020 at the Hawthorn Funeral Home Chapel with Rev. Dale Walker officiating. Burial will follow in the Mt. Bethel Cemetery under the direction of... View Obituary & Service Information

The family of Mr. Tony Hight created this Life Tributes page to make it easy to share your memories.

Send flowers to the Hight family.