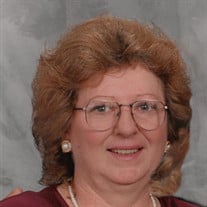 Funeral services for Mrs. Vicki Adams, 69, of Carthage, Texas will be 2:00 p.m. Friday, January 7, 2022, at the Hawthorn Funeral Home Chapel with Rev. Dennis Landtroop officiating. Visitation will be 1-2:00 p.m. Friday prior to the service.... View Obituary & Service Information

The family of Mrs. Vicki Georgina Adams created this Life Tributes page to make it easy to share your memories.

Send flowers to the Adams family.