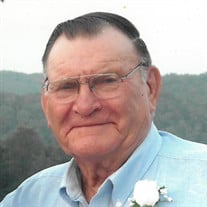 Funeral Services for Mr. Wayne Mayo Bellows, 91, of Carthage, Texas will be 10:00 a.m. Wednesday, December 8, 2021 at Hawthorn Funeral Home Chapel with Rev. Rick Linebarger and Rev. John Gradberg officiating. Burial will follow in the Gary Cemetery under the direction of Hawthorn Funeral Home. Visitation will be 9 – 10:00 a.m. Wednesday prior to the service. Mr. Wayne Mayo Bellows was born June 30, 1930 in Woodward County, Oklahoma. He passed this life December 5, 2021 peacefully at his Carthage, Texas home. Mr. Bellows was one of five children born to the marriage of Virgil Mayo and Delean Canfield Bellows. He was born and raised in Northwest Oklahoma graduating from Sharon High School with the class of 1951. He married Laura Faye Byrd June 6, 1956, they were married 65 years and raised 3 children. Mr. Bellows served his country through the U.S. Air Force entering in 1952 and honorably discharged in 1956. During his career he worked in the farm and ranch industry, served as a carpenter and worked for Louisiana Pacific for over 20 years retiring in 1995. Mr. Bellows loved the outdoors, spending time gardening and raising vegetable varieties for the farmers market in Carthage. He attended First Baptist Church in Gary, Texas where he accepted Christ as his Savior June 22, 1996. He was ordained as a deacon April 9, 2000. Wayne and his wife Laura later joined Mt. Calvary Baptist Church in Carthage, Texas where they are members today. He is preceded in death by one son, one granddaughter, three brothers and his parents. Mr. Bellows is survived by his loving wife Laura Bellows of Carthage; daughter, Deborah Ferguson and husband Burl of Sevierville, TN; son, Lester Bellows and wife Debbie of Carthage; grandchildren, Wendy Ferguson of Sevierville, TN; Cody Ferguson of Sevierville, TN; Whitney Bellows of Fresco; great grandchildren, Jacob and Jayden of Sevierville, TN; numerous nieces, nephews and a host of friends.

The family of Mr. Wayne Mayo Bellows created this Life Tributes page to make it easy to share your memories.

Send flowers to the Bellows family.