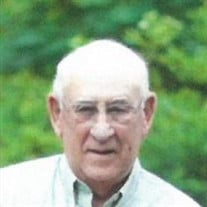 Graveside funeral services for Mr. Wayne Holland, 81, of Carthage, Texas will be 2:00 p.m. Friday, January 29, 2021 at the Waldrop Cemetery with Rev. Rick Linebarger and Bro. Ronnie Mutina officiating. Burial will follow under the direction of Hawthorn Funeral Home. Visitation will be 6-8:00 p.m. Thursday night at Hawthorn Funeral Home. Mr. Billy Wayne Holland was born October 25, 1939 in the Fairplay Community of Panola County, Texas. He passed this life January 27, 2021 in Tyler, Texas. Wayne was the younger of two children born to the marriage of Watford Wayne “WW” and Hazel Emma Byrd Holland. He was raised and schooled in Beckville graduating with the Bearcat class of 1958. He married Elsie Gay Lawhorn April 17, 1959 and they celebrated 61 years of marriage and two daughters. Mr. Holland worked in the oil field as a heavy equipment operator until his retirement. He was a longtime member of the Carthage Missionary Baptist Church where he served as a deacon for many years. Wayne loved the outdoors, hunting and fishing, as a member of the Blankenship Hunting Club. He loved his years coaching baseball. He is preceded in death by his parents; and a sister, Marcy Holeman. Mr. Holland is survived by his loving wife Elsie Holland of Lake Murvaul; daughters, Carol Leach and husband Donald of Lake Murvaul, and Jan Carr and husband Jeff of Carthage; grandchildren, Leslie Kerlick and husband Chad, Corey Holland and wife Jenny, Ginger Hawkins and husband Brett, Morgan Young and wife Nicky; numerous other grandchildren, great grandchildren; and a host of friends. Serving as pallbearers will be Jeff Carr, Donald Leach, Corey Holland, Brett Hawkins, Chad Kerlick, Morgan Young, Rowdy Young, Levi Kerlick, and Brodie Young; honorary pallbearers will be the Deacons of Carthage Missionary Baptist Church. The family suggests donations to the Carthage Missionary Baptist Church Building Fund. An online guestbook may be signed at www.hawthornfuneralhome.com

The family of Mr. Wayne Holland created this Life Tributes page to make it easy to share your memories.